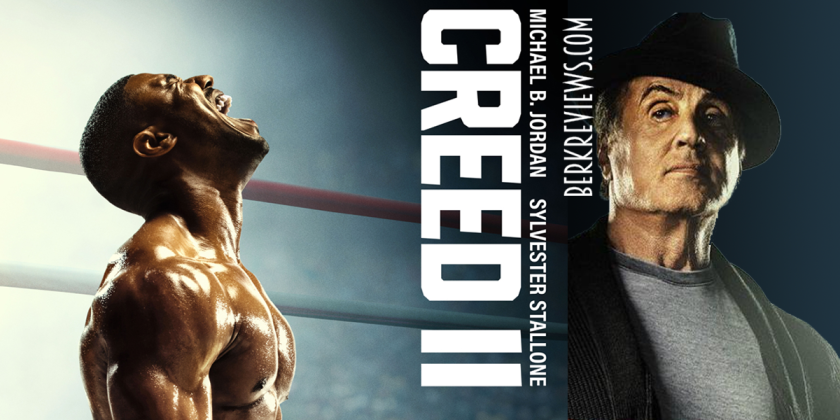 Creed II (2018) is another solid entry into the Rocky-verse, but it isn’t as strong as Creed (2015). The hardest part of this acknowledgment is identifying why it isn’t as good as the first one, as the three leads give a strong performance – but Sylvester Stallone does have a writing credit, and it’s hard to ignore the number of monologues Rocky gets this time. Not that they’re bad…but they’re abundant. There is plenty here for people to enjoy – but when the first film ended I was blown away, whereas this time I was merely content.

Creed II is solid, but not as good as the first

Adonis Creed (Michael B. Jordan) has been on a streak since the fight at the end of the first film, and this movie starts with his title shot. After becoming the world champion, Donnie finds himself rather unfulfilled, as he expected many new fighters rising to challenge him. The most dramatic of those new fighters is Viktor Drago (Florian Munteanu), son of Ivan Drago, (Dolph Lundgren) the man who killed Apollo Creed in Rocky IV. Donnie searches to figure out why he feels the need to take this fight while risking his health and the relationships with Rocky, Bianca (Tessa Thompson) and their blossoming family, and his mother,. Mary Anne Creed (Phylicia Rashad).

The cinematography during the boxing matches is strong again. I don’t believe it was exactly the same that Ryan Coogler utilized, but director Steven Caple Jr. clearly got the idea. There are moments that feel like you’re playing a VR game as you step into the first person POV of Donnie, and the hits feel real as a result. The camera is floating in the ring, and is very erratic. Each punch lands hard, and the cinematography emphasizes that perfectly. The fight sequences are clear highlights of the film.

The best part of the first film was the development of the characters. In Creed II, Donnie and Bianca continue to grow, Rocky becomes wiser and more regretful as he ages, and even the villains in this film get some development, as Viktor is Ivan’s chance at redemption after his loss to Rocky. There are moments that really work and click on an emotional level, but not as well as in the first film. Bianca doesn’t seem as important or as independent in this film as she did in the first. She has become more of a sidekick to Donnie, rather than the woman in the partnership that was developing in the first. She’s still doing her music, however, and likely it is Tessa Thompson’s incredible talent that won’t allow Bianca to seem like a doting fiancé – but her story seems secondary to Donnie more so than it did in the first film.

Stallone is unmistakably locked back in and looking for that second Oscar nod as he returns to the character that made him famous. This film is aware of how important Rocky is to our country – almost as if he existed outside of the film. The fact that Ivan Drago is the antagonist in this movie is no surprise, as Rocky IV did a lot for the franchise. The cross-cut training montage of Ivan and Rocky is iconic, an -, slight spoiler – you get something like that in Creed II. There is a cool moment between Ivan and Rocky, but at the same time, it doesn’t really go anywhere past that scene. The moments with Ivan and Viktor try to humanize the slightly robotic depiction of the character from Rocky IV, but it only slightly works.

Creed II is a good movie. It has enough of what we love about the franchise, but it still didn’t land as strongly as I’d hoped. Is it simply because Coogler didn’t direct? Probably. We won’t know how great a Coogler-led sequel could have been, but at least he introduced a compelling new character to follow if they decide to keep making these films. Creed II earns a Decent Watch rating.