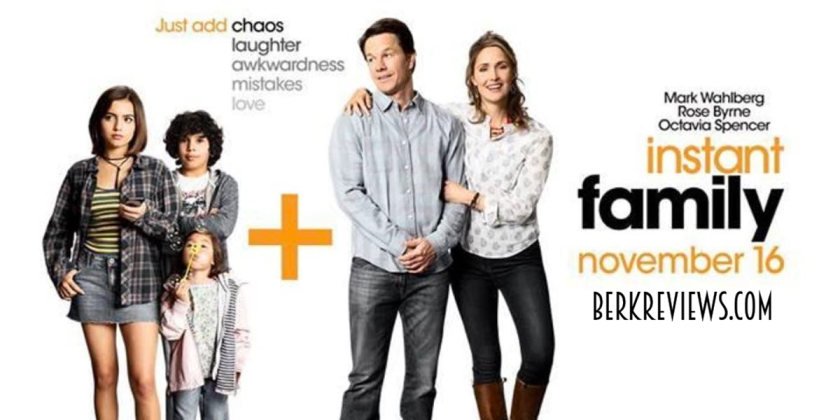 It wasn’t that long ago that I reviewed Mile 22 (2018) and pointed out how bad a performance Mark Wahlberg gave. It wasn’t until just a few weeks back I discovered that Instant Family (2018) even existed and that it was about to drop in theaters starring Wahlberg and Rose Byrne. Now, it is probably my favorite feel-good family comedy that has come out this year…between the funny moments, the excellent performances, and the family drama, this was a film that worked for me.

Some mainstream comedies work; Instant Family is one of them

Pete (Wahlberg) and Ellie (Byrne) are a couple who have found success in buying and flipping houses, and have decided to try their hand at parenting. They lean towards adoption, and after going through the training, they take in a teenager named Lizzy (Isabela Moner) her younger brother, Juan (Gustavo Quiroz), and her sister, Lita (Julianna Gamiz). Pete and Ellie start off like naturals, but soon find it’s hard to earn the trust and love of kids who have been impacted by the system.

Isabela Moner really has to carry many of the tough scenes in the film. Since she is the older sibling, her connection with Juan and Lita has to be believable, as she has been a surrogate mother for them. That chemistry is there, but where Moner gets to shine is…well, basically everywhere. She brings the attitude of the angst-filled teenager, the heartache of a kid who just needed love, and the joy of a person who’s realized life can get better. Moner nails each moment, and is proving that she will be a star as long as she keeps making solid script choices (overlooking her roles in Transformers: The Last Knight and Sicario: Day of the Soldado).

Then there is Rose Byrne. Oh, Rose Byrne, how you manage to be so charming and funny is beyond me. She was terrific in Juliet, Naked (2018) and now ends the year with another excellent performance. Like Moner, Byrne’s performance is extremely nuanced from the despair of their choice to adopt, the wistful hopefulness that preceded that, her accidental mocking of another potential foster parent, and the confident person she ultimately always plays. Byrne is just terrific in most things, but she plays this role so well that Ellie and Pete do feel very lived-in.

Wahlberg deserves his share of credit. His dopey, muscle head persona really lends itself well to comedies. What he doesn’t usually manage to do is garner any empathy, as he often plays idiots making dumb choices that we can’t help but laugh at. Look at The Other Guys, Daddy’s Home, The Big Hit, or Pain and Gain to see what I’m referring to. However, his dopiness here is downplayed as a fish-out-of-water type, and it works really well. Byrne and Wahlberg have enough chemistry that their struggle earns a ton of empathy, and their successes garner cheers.

Director Sean Anders delivers a solid, family-friendly feature film that is accessible, funny, and emotionally moving. The fact that it’s based on a true story only makes it more valuable for people to see, which is why I’m happy it’s such a mainstream affair. With that said, there are some solid filmmaking elements that Anders uses to make the movie flow. Match cuts, interesting visuals (one where Wahlberg is looking at the possible foster kids on the computer), and an outstanding supporting cast make for a very great time in the movie.

Octavia Spencer, Tig Notaro, Tom Segura, Margo Martindale, Julie Hagerty, and Iliza Shlesinger give great supporting performances. There are others that have smaller roles, but these mentioned just stand out. Spencer and Notaro as the staff members of the adoption agency are just fantastic. The get some of the best laughs in the film. Martindale has proven to be a reliable character actress, but she excels here. She doesn’t get too many scenes, but she owns the role as Pete’s mom so well and gives so much life to a character that could have just been bland.

Ultimately, my daughter and I both loved Instant Family. It was quite fun,  and at the same time, it contained great dramatic content. There is nothing wrong with loving a mainstream movie if it is well-made and does what it sets out to do. This film succeeds and earns the Must See rating from me.