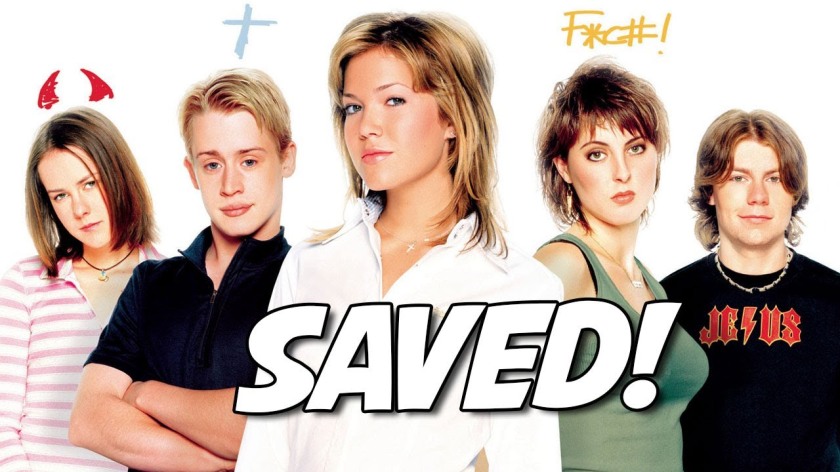 Saved! is a film that had been recommended to me several times often as a film to pair with Juno (2007), but I’d not gotten to it. The viewing of this film brings me to a current total of 35 days without missing a movie, and it was chosen because of its comedic nature and length. However, it only took a few minutes to lock me in, once the comedic tone was established in addition to the realization that Jena Malone was the lead.

Saved! is hilarious and endearing

Mary (Malone), a student at a Christian high school,  attempts to cure Dean (Chad Faust), her boyfriend, of his homosexuality by engaging in premarital sex. Soon, he’s sent to a camp to cure him of his perceived ailment, and she’s left with an unfavorable condition: Teen-Pregnancy. Mary is trying to avoid her friends and family, so that she may prevent them from finding out her secret, which would place her at the center of judgment.

The cast in this film is fantastic. The tone of Saved! is definitely criticizing aspects of Christian culture, but not the religion itself. For example, Mandy Moore as Hilary Faye is a character who is so obsessed with proving her faith she completely misses the point of it in the first place. She hurts others and seeks to judge those who don’t fit into the framework she has perceived to be a “good Christian”. Mary starts the film in a similar mindset as Hilary, but through the course of the movie, the choices she is put up against aid her with realizing that there is something wrong with this strict and often condescending point-of-view.

Cassandra (Eva Amurri Martino), the only Jewish girl to go to this school, is a rebel who has developed quite the reputation for being the “bad” girl. She ends up having a sweet love story with Hilary’s disabled brother, Roland (Macaulay Culkin). The two definitely become important figures in Mary’s personality transformation through the course of the film. The chemistry the three have with each other is extremely endearing, with Eva Amurri Martino really winning me over and making me a fan of her performance.

Patrick Fugit plays Patrick, the pastor’s son who develops a big crush on Mary. Their connection and his treatment of her throughout the film is definitely one of the highlights. While other movies tend to opt for some over-the-top dramatic moment to show a character isn’t who we originally thought they were, this was avoided in the film with Patrick. As Mary begins to see the guy he is, so does the audience, and we fall with her into his goofy smile and skater-boy haircut.

Saved! does so many things right. The comedy is genuinely funny, the performances are great, and the messages the film conveys are positive. It pokes fun at parts of religion, but doesn’t outright dismiss its validity or need in our society. This is a great film that has re-watchability written all over it. Saved! gets the Must See rating and is currently available on Amazon Prime.