How can Bad Robot continue this trend? They shocked us with 10 Cloverfield Lane’s sudden release date two years ago. Now, days after Cloverfield 4 was announced for later this year, and people were speculating about what happened to the originally titled “God Particle”, Netflix responds by dropping the big bombshell via a Super Bowl commercial that they’ve acquired Cloverfield 3 and it’s now called The Cloverfield Paradox. Plus, it would be available immediately after the Super Bowl…so I pushed back my bedtime and stayed up to see the next entry in the Cloverfield franchise.

The Cloverfield Paradox didn’t live up to the previous entry, but it’s still an entertaining film

Ava Hamilton (Gugu Mbatha-Raw) is a member of a team looking to solve the world’s energy crisis. Working on an international space-station with a team of experts, they are attempting to launch a particle accelerator that will somehow create a perpetual energy supply. However, things don’t go exactly as planned, and after a long stint in space, the crew finds themselves lost. 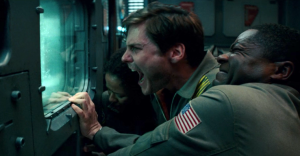 The film is fun. It’s not as gimmicky as Cloverfield’s found-footage style and nowhere near as masterful or suspenseful as Dan Trachtenberg’s 10 Cloverfield Lane. Yet, the Cloverfield franchise offers another young director, Julius Onah, a chance to shine by giving him a great cast and a solid science fiction/horror script and setting. “The Shepard”, the device they’re launching – and the station it is housed in – are visually appealing, though it’s geography is never established that well. All claustrophobic space movies will elicit comparisons to Ridley Scott’s Alien in my mind, and the interactions between the crew in this film do seem like shadows of that classic movie. That said, many of the moments pull from a variety of space movies, making plot elements predictable, but the cast makes them all still work.

The cast carries the film

Mbatha-Raw takes the film on her shoulders, and it’s her character that we have the most emotionally invested in. The film starts with her and Michael (Roger Davies) in a car stuck in a long line waiting to get gasoline before another blackout occurs. He tells her she has to go to space as she could be the one who helps solve this energy crisis. As the movie goes on, we learn more about them and why they were both willing to be apart for so long. Their relationship is shown in a few ways throughout the film, including seeing Michael on Earth after the Shepard’s failure occurs, creating new problems on the surface.

The crew is filled out with actors David Oyelowo, Daniel Brühl, Chris O’Dowd, Aksel Hennie, Ziyi Zhang, and John Ortiz. Each represents a different country and are “united” to find a solution to the energy crisis, but after two years they are all getting on each other’s nerves. The threat of war back on Earth only adds to the pressure, plus there is only enough fuel for three more attempts before their failure will be permanent. Once things go wrong, they continually spiral downward, and because of multiple dimensions and the paradox theory discussed in the film, a lot of the things that occur are hard to explain. However, O’Dowd’s ability to lighten many of the moments with a good joke made to deal with the crazy things happening around him (plus the fact that it’s a Cloverfield movie) made the film constantly enjoyable.

There are a few surprises and definitely a couple of moments that made me wiggle uncomfortably in my seat while watching. Much of the plot is a bit predictable, but not in a way that ruins the experience. It probably deserved a theatrical run, but if you’re a subscriber to Netflix, it’s definitely one to give your attention to. While not perfect, The Cloverfield Paradox worked for me, and earns the Not Quite Golden, Ponyboy rating.