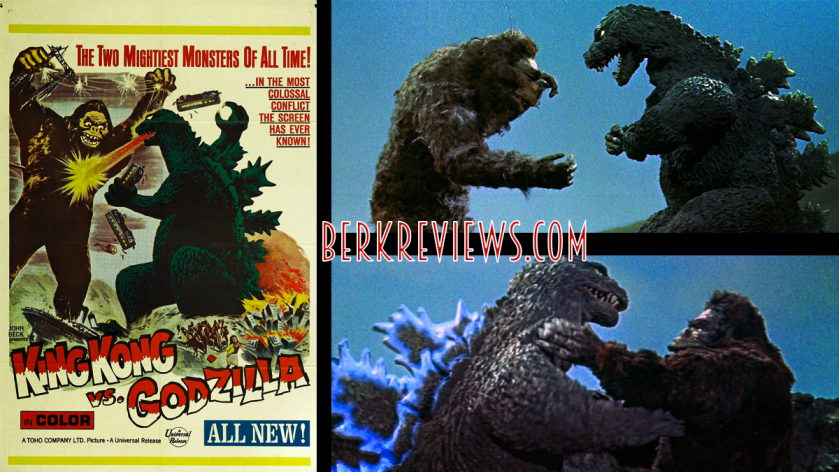 I want to start this review off by saying I was only able to get my hands on the American version of this film and I think that impacted my opinion of it greatly.  That being said, I did have a good time with this film. King Kong Vs. Godzilla marks the return of Godzilla after a seven-year hiatus following the poor reception of “Godzilla Raids Again” so it is fitting that Ishiro Honda returns to direct. Rather than taking the darker more serious approach like the first two entries, King Kong Vs. Godzilla is more of a light-hearted satire of the kaiju genre while still serving as a social commentary. This time Honda is tackling corporate greed.

Mr. Tako, head of a large pharmaceutical company, is upset over the television shows his company is sponsoring and wants something new and exciting to boost his ratings. When Mr. Tako learns of a giant ape-like monster on Farou Island, He orders two men, Osamu Sakurai, and  Kinsaburo Furue to go capture the creature so they can use it for a commercial to boost ratings and sales. It’s a ridiculous plot and the film knows it and does not take itself too seriously which makes it easy for the viewer to throw logic out of the window and just enjoy the ride. Ichiro Arishima’s performance as Mr. Tako is cartoonish and over the top, almost giving him a Charlie Chapman quality, for better or worse.

Meanwhile,  Godzilla breaks free out of the same iceberg he was trapped in seven years before at the end of Godzilla Raids Again… In the original version of this film. The American version chooses to ignore the past film entirely and instead, claims he was trapped there for millions of years. This was my biggest gripe with this version of the film. This movie picks and chooses what continuity it wants to keep with no rhyme or reason. Another scene directly references the fact that Godzilla is attracted to light, which was established in the last film. Are we to believe that these characters just happen to know about this specific weakness of this creature who was thought to be extinct? How would they even know the creature’s name was Godzilla? But I digress, as the return of Godzilla is displayed all over the media, Mr. Tako becomes very upset as the event is taken away from his company’s spotlight.

When Kinsaburo and Osamu arrive at the island to capture Kong, they are confronted by the island’s natives. The men are able to pacify the hostile natives by giving them a radio and some cigarettes (even to a young child, after hesitating a moment to think it over).  It starts to storm and all the natives drop to the ground to pray to their God. Both men ridicule the natives until we hear Kong roar in the distance. We don’t get to see Kong until later when a giant octopus attacks the island. This was shot using both footage of a real octopus and stop motion effects for the octopus’s attacks. While seeing the creature grab a native and toss him was shocking, the stop motion effect wasn’t particularly convincing. King Kong quickly arrives to defend the island and defeat the octopus, then passes out after drinking some red berry juice while the natives celebrate the victory. Kinsaburo and Osamu use this opportunity to tie Kong to a raft lined with explosive TNT, in case of emergency, and begin to transport him back to Japan. This scene does an excellent job at making Kong out to be a formidable opponent that demands respect, which is why it’s probably my favorite moment in the film.  It’s also a nice nod to Godzilla’s origins. The original design for Godzilla was to be an octopus, not the iconic dinosaur-inspired design we know today. Honda also wanted to use stop motion effects instead of the actor in a costume but settled due to the film’s low budget. This scene gives us an idea of what Honda’s original idea could have looked like.

When Kong inevitably awakens and escapes the raft, he heads for Japan and engages in a brief battle with Godzilla where he hurls a couple of boulders at Godzilla, who in return shoots an atomic beam at Kong. Of course, Kong runs away. While this encounter was very short, it served its purpose of getting the viewer hyped for the big fight we were promised. Godzilla’s atomic breath looks better here than it ever has so far in this franchise. In fact, most of the effects so far in this film look phenomenal. With both monsters on the loose, the military tries desperately to put a stop to the mayhem but are overall ineffective until they put up high voltage wires to trap the creatures, which stops Godzilla easily enough. Here we learn that King Kong is strengthened by electricity which is odd to say the least, but hey we’ll roll with it. Kong continues to reign over Japan until the military uses the berries from Faro Island, to make King Kong pass out as he did earlier in the film. King Kong is transported to Godzilla with the hopes of the monsters killing each other in combat.

As soon as Kong is dropped onto the island with Godzilla, he slides down a mountain, knocking Godzilla over, and sending him tumbling down. Godzilla gets back up, obviously upset over the attack, and starts heading towards his opponent, who is now clumsily running to find a hiding spot behind some large rocks. Kong is now able to creep up behind Godzilla and grabs his tail in an attempt to throw him but is overpowered and gets tossed aside instead. Kong retaliates by hurling more large rocks at his foe, one of which gets reflected back to him when Godzilla hits it with his tail. Godzilla blasts Kong with his atomic breath. After hesitating a moment, Kong charges at Godzilla with full speed, and the two continue trading blows until Kong falls to the ground and Godzilla buries his opponent under a pile of rocks and continues to beat Kong and blasts him with his atomic breath. Just when it seems all is lost for Kong, a big thunderstorm rolls in and supercharges him. With his newfound strength, Kong rises and grabs Godzilla by the tail, twirls him around, and tosses him aside with ease. Kong continues to beat Godzilla relentlessly before uprooting a tree and forcing it into Godzilla’s mouth. Godzilla catches the tree on fire and shoots it back to Kong before charging him. Kong, the more agile of the two uses Godzilla’s momentum and throws his opponent over his back. The two continue to brawl, destroying many buildings in the process until they both fall into the ocean. Only King Kong emerges, making him the winner of the fight through the human spectators note that Godzilla is likely still alive.

This film has more than its fair share of issues but is overall a great time and it never left me feeling bored. The film’s fun fight sequences make up for its sloppy and illogical writing. One thing that cannot be forgiven however is King Kong’s goofy appearance. It is hard to take him seriously because the suit looks like something you might pick up at Spirit Halloween. Godzilla on the other hand looks better than he ever has and it’s a bit jarring to see the two next to each other. One thing this movie does exceptionally well is giving each monster a definitive personality. Kong is clumsy but smart. You can see him thinking everything over before he attacks while Godzilla is a powerhouse that relies on his raw strength. Kong knows he can’t win in an outright brawl so he fights smarter and keeps his distance. Aside from Mr. Tako, most of the human characters are very forgettable. Overall this film is a good time, as long as you take it at face value. This is why I’m giving it the “ A Decent Watch” rating. If you are here to watch two iconic monsters engage in an entertaining battle, you will like this, otherwise, it’s probably not for you.

King Kong Vs. Godzilla is not available on HBO max or really anywhere else online and has a 50% Rotten Tomatoes score.  Next week We are again taking a break from the mainline Godzilla series to watch 1961’s Mothra. I am doing this to prepare for1964’s  Mothra Vs. Godzilla, which we will watch the following week. Mothra is available to rent from Amazon prime video for $3.99,