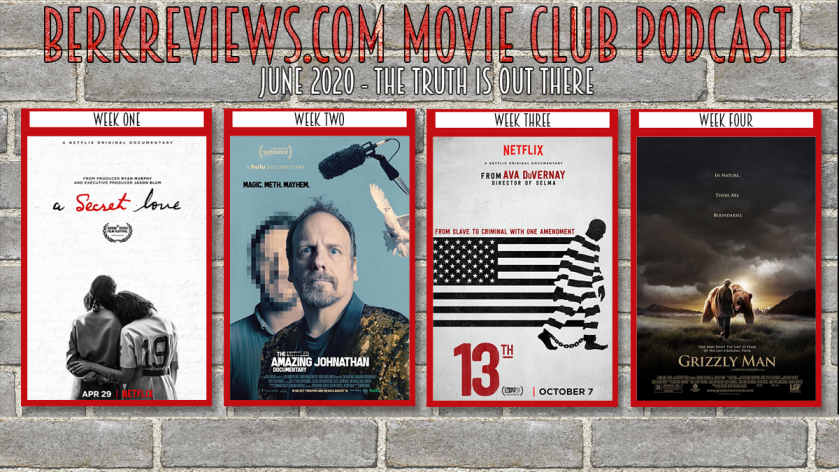 Jonathan (@Berkreviews) and Corey (@coreyrstarr) dive into June 2020 looking for truth in cinema…or at least what is often sold as “truth” in the form of documentaries. The Truth Is Out There has the duo looking at documentaries that at least one of them has not seen each week of the month. Utilization of the streaming services will play a big factor in this case.

Corey selected A Secret Love (2020) that was set to debut at SXSW 2020, before it was shut down due to COVID-19, is now available to watch on Netflix. The film is directed by Chris Bolan and features Terry Donahue and Pat Henschel. Terry and Pat fell in love in 1947, a time when two women being a couple was not socially appropriate — which, to be real, wasn’t really acceptable until a few years ago to many and still too many dispute their right to love–, and this film documents their stories of struggle and how coming out in their later years presents a new set of problems.

Few documentaries have more relevance right now than director Ava DuVernay’s 13th (2016). Corey has been meaning to watch this for a while and now seemed better than ever. IMDb.com says the film takes “An in-depth look at the prison system in the United States and how it reveals the nation’s history of racial inequality.”

Berk is a big advocate for studying directors and their filmographies and Werner Herzog is one who he has not seen any of his work. Herzog’s 2005 documentary Grizzly Man seems like a logical starting point. The film is “A devastating and heart-rending take on grizzly bear activists Timothy Treadwell and Amie Huguenard, who were killed in October of 2003 while living among grizzly bears in Alaska.”