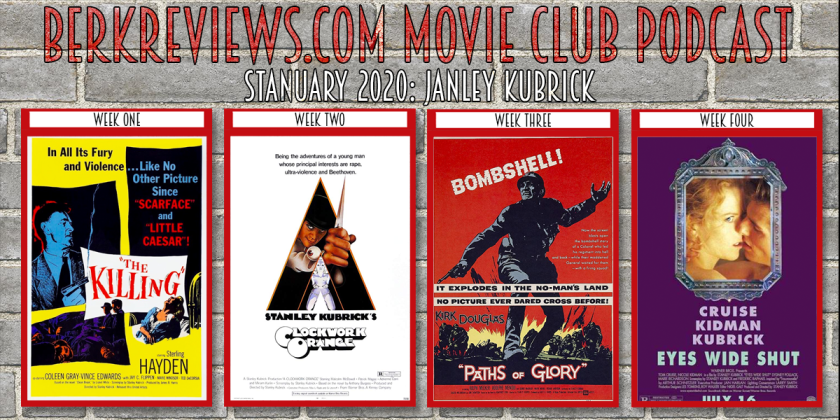 It’s the year 2020 Jonathan (@berkreviews) and Corey (@coreyrstarr) decided they need to check a few more of Stanley Kubrick’s films off their gap list. Thus, they start the year-off with the theme 2020: Janley Kubrick or Stanuary. There are a few back episodes of Movie Club where they watched Kubrick films, but there are some major ones left to see, but now in the year 2020 they will check them off their list.

Corey gets to pick the first film of the year and she went with an old Kubrick that neither had really any knowledge of. The Killing (1956) is one of the earliest feature films by Kubrick and his foray into Noir. Directed and co-written by Kubrick, the film stars Sterling Hayden, Coleen Gray, and Vince Edwards. The IMDb.com plot synopsis reads “Crook Johnny Clay (Sterling Hayden) assembles a five man team to plan and execute a daring race-track robbery.”

Jonathan has been putting off watching A Clockwork Orange because of his knowledge of a tough scene featuring Singin’ in the Rain. However, it’s time to finally check this Kubrick classic off his gap list. The film stars Malcolm McDowell, Patrick Magee, and Michael Bates and plot reads “In the future, a sadistic gang leader is imprisoned and volunteers for a conduct-aversion experiment, but it doesn’t go as planned.”

Corey brings us back to the 50s with Kubrick’s War Drama Paths of Glory (1957). This film is in the Criterion Collection and its plot summary reads “After refusing to attack an enemy position, a general accuses the soldiers of cowardice and their commanding officer must defend them.” It stars Kirk Douglas, Ralph Meeker, and Adolphe Menjou.

Jonathan brings us to the end of Kubrick’s career with his 1999 film Eyes Wide Shut starring Tom Cruise, Nicole Kidman, and Todd Field. 1999 is regarded as one of the best years in film so it gives another reason to check this off the gap list. The IMDb.com plot synopsis reads “A New York City doctor embarks on a harrowing, night-long odyssey of sexual and moral discovery after his wife reveals a painful secret to him.”