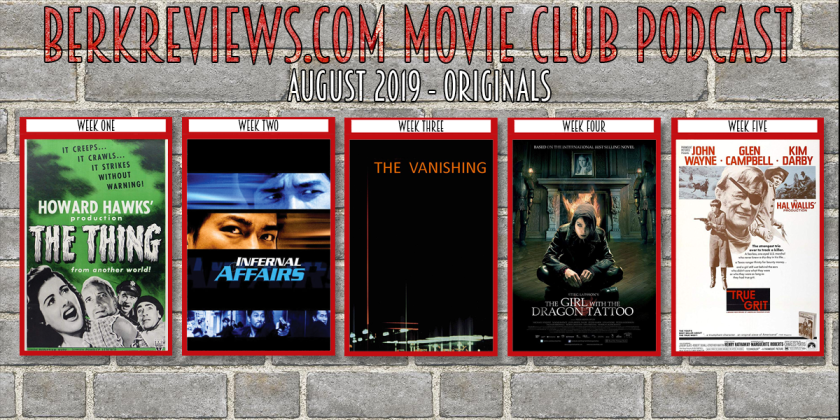 We live in an era of remakes and sequels. With that mind, Corey (@coreyrstarr) and Jonathan (@berkreviews) realized there were several films they’ve seen and loved that were, in fact, remakes of older movies. Thus, the theme for August became Originals! That is to say movies that have been remade that either Jonathan or Corey hasn’t seen the source material but has seen the remake. This required a bit of research to pick the movies for this month, but the two did a great job of finding some real classics they have never seen. August will have five episodes so Corey got to pick three movies to Jonathan’s two.

Both Corey and Jonathan are big fans of John Carpenter’s The Thing (1982), but neither has ever seen the original film that inspired it. The Thing From Another World (1951) is directed by Christian Nyby and, as the legend goes, Howard Hawks. If you’ve seen Carpenter’s film you’ll recognize aspects of the plot, but it is slightly different. Here Scientists and American Air Force, led by Capt. Patrick Hendry (Kenneth Tobey), officials fend off a bloodthirsty alien organism while at a remote arctic outpost.

Jonathan watched The Departed (2006) just a few years ago when he started Berkreviews.com. At that time, it was brought to his attention that Infernal Affairs (2002) was the inspiration for the Martin Scorsese film. Directed by Andrew Lau Wai-Keung and Alan Mak and starring Andy Lau, Tony Chiu-Wai Leung, and Anthony Chau-Sang Wong, the movie features “A story between a mole in the police department and an undercover cop. Their objectives are the same: to find out who is the mole, and who is the cop.”

Corey picked The Vanishing (1988) because she was a fan of The Vanishing (1993) remake by the same director, George Sluizer. The ’93 remake stars Jeff Bridges, Kiefer Sutherland, and Nancy Travis while the original Dutch film stars Bernard-Pierre Donnadieu, and Gene Bervoets. According to IMDb.com, “Rex and Saskia, a young couple in love, are on vacation. They stop at a busy service station and Saskia is abducted. After three years and no sign of Saskia, Rex begins receiving letters from the abductor.”

Jonathan really enjoyed David Fincher’s 2011 remake The Girl with the Dragon Tattoo and has been determined to watch the original films. It only makes sense to start with Swedish film The Girl with the Dragon Tattoo (2009) directed by Niels Arden Oplev and it stars Michael Nyqvist, Noomi Rapace, and Ewa Fröling. If you aren’t familiar with the story it features “A journalist is aided by a young female hacker in his search for the killer of a woman who has been dead for forty years.”

Corey and Jonathan really love the Jeff Bridges led, Coen Brothers directed, 2010 film True Grit. Neither are that familiar with John Wayne and despite neither loving The Searchers (1959), they decided it made sense to watch the original True Grit (1969). The movie is directed by Henry Hathaway and it stars Wayne, Kim Darby, and Glen Campbell where Rooster Cogburn is hired to “help a stubborn teenager track down her father’s murderer in Indian territory.”