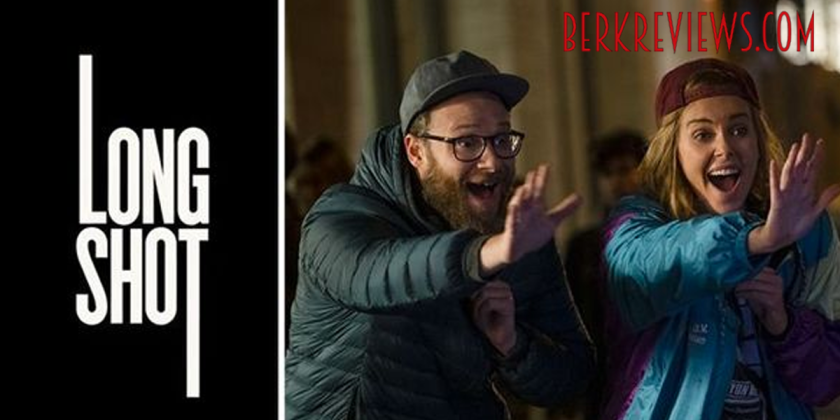 It is likely that if you like Seth Rogen and are a fan of his often vulgar, drug-related comedic stylings, than you will enjoy Long Shot (2019). You may also need to enjoy romantic comedies enough that the genre tropes won’t annoy you. If you’ve been reading my reviews over the years, then you’ll know by now that I very much enjoyed this film and all of its Seth Rogen-y goodness. However, there were a few other performances that truly outshined him, and made this a stand-out amongst some of his more recent films.

Fred Flarsky (Rogen) is a journalist who refuses to ever compromise his moral code, making him a rare fighter for truth in an industry being overrun by corporations. When his small paper is bought by Parker Wembley (Andy Serkis), he quits on the spot…but he has no other prospects, and he spirals into despair. Right away, Flarsky wins me over – partially because he reminds me of the type of journalist I wanted to be when I was in college with the romanticized idea of truth-seeking reporters like Woodward and Burnstein as my inspiration. Thus, in the opening scene when Fred is at undercover at a white supremacist meeting (which has a few good jokes and ends with a weak CG physical gag), I was able to get into his mindset.

After quitting, Fred reaches out to his longtime friend, Lance (O’Shea Jackson Jr.), who is doing so well at his job (which appears to be some kind of financial trading) that he is able to take the whole day off to spend it with Fred and help ease his pain. It needs to be said that O’Shea Jackson Jr. just needs to be in everything at this point. His appearance in every movie elevates it at least a little bit – I’m looking at you, Den of Thieves (2018). While his character doesn’t have any real goals and exists solely to be a guide to Fred tip-toeing closely to the magical negro trope, you can’t help but love Lance. He’s confident, funny, a loyal friend, and quick to call Fred out on his bullshit.

In fact, it’s in Lance’s pursuit to cheer Fred up that leads to the most important opportunity that ultimately sets up the plot. Fred runs into his old babysitter, Charlotte Field (Charlize Theron), with whom he had a crush on and shared an awkward story with. Of course, the big twist here is that she is now the Secretary of State, and is seeking to become the first female president. From the moment she shows up, the audience is reminded of how great Theron is. She has played so many great characters over the years and has given tremendous performances, but this may be her best. Why? Theron is able to convince me that she not only loves Rogen’s character, but that there is a genuine attraction between the two. This may sound mean, but let’s be real; Rogen is punching way above his weight class. Yet, I never once doubted her feelings for him throughout the film. Other characters are extremely concerned with the desirability imbalance between them, but Theron sells the relationship, and the chemistry between the two actors is strong.

Overall, I found Long Shot to be extremely enjoyable. The film worked almost completely for me, with just a few moments feeling excessive (one scene shocked me, showing that the film would go that far for a visual gag). A shock that I enjoyed, however, was the small role that Alexander Skarsgård had in the movie as Prime Minister James Steward, as I had to look up who the actor was because he was so different than I am used to. Still, my wife and I enjoyed the film, and it was a solid date night. Long Shot earns the Not Quite Golden, Ponyboy rating.