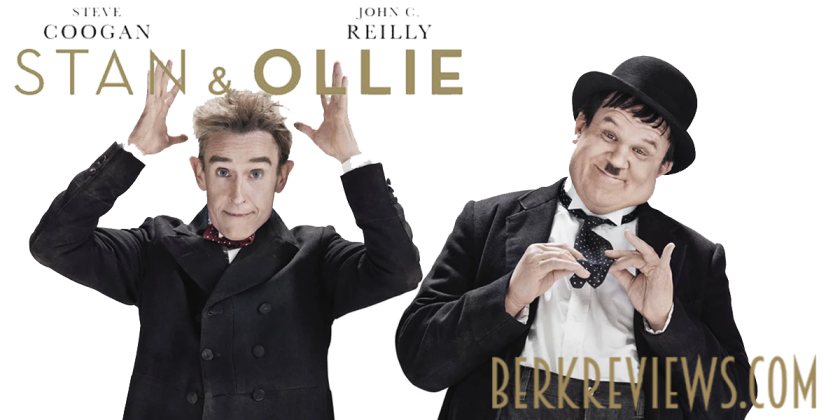 I’ve been familiar with Laurel and Hardy since I was little and saw them on a Scooby Doo episode. It’s hard not to be aware of the comedic duo, but realistically I’ve not seen many of their films. The new biopic, Stan & Ollie (2018) directed by Jon S. Baird had caught my attention, but I wasn’t sure how compelling a story it could be. It turns out that the film is quite engaging and, more importantly, endearing as it primarily shows the duo attempting a comeback in the mid-‘50s and all the obstacles they encounter while trying.

Stand & Ollie is super enjoyable and full of charm

Stan Laurel (Steve Coogan) and Oliver Hardy (John C. Reilly) don’t get to jump right back into making movies though. Instead, they are doing a theater tour in England that asks a lot of the aging actors as their brand of entertainment is quite physically tasking. They’re up against their own health, uncertain promoters, and being forgotten by the masses, which ultimately tests the strength of their bond.

Reilly has been an actor whose incredible acting abilities only seem to become more apparent the more roles I see him. It is easy to see how versatile he is as he can transition from comedy to drama so seamlessly. Thus, his casting in this film is perfect. Oliver Hardy is able to really make the audience laugh, but there is something deep within that seems quite tragic. He loves performing and clearly enjoys reuniting with his old partner, but there is an uneasiness that hangs in the air around the two. Reilly is always good at being the sad sack and it works extremely well here.

Coogan is an actor I’m less familiar with, but with whom I intend to visit more of his catalog. I’ve seen all of the Trip movies and have become a fan of his from those where he is simply playing a caricature of himself. As Stan Laurel, Coogan is brilliant. The look in his eyes in most scenes reveals the inner turmoil Laurel finds himself in. Within the pools of his eyes, there is lots of remorse and doubt, but there is also hope. This tour and the possibility of the movie the duo is writing seem to drive him. There is a pain that the movie looks to extinguish as Laurel and Hardy try to reconnect.

The beauty of their friendship, and honestly the developing one between Ida Laurel (Nina Arianda) and Lucille Hardy (Shirley Henderson) as well, is extremely touching. While it has not always been easy, the two men clearly love each other. Aside from the comedy the two have always managed to bring, I found myself feeling very close to the two men as people. This is in large part to the terrific performances, but also to the writing.

Stan & Ollie is extremely enjoyable and manages to bring a few solid laughs and a bit of emotion. Reilly and Coogan have great chemistry and they both deliver excellent performances. This is a film that is definitely worth checking out, especially if you’re only vaguely familiar with the comedy team. I give Stan & Ollie the Not Quite Golden, Ponyboy rating.