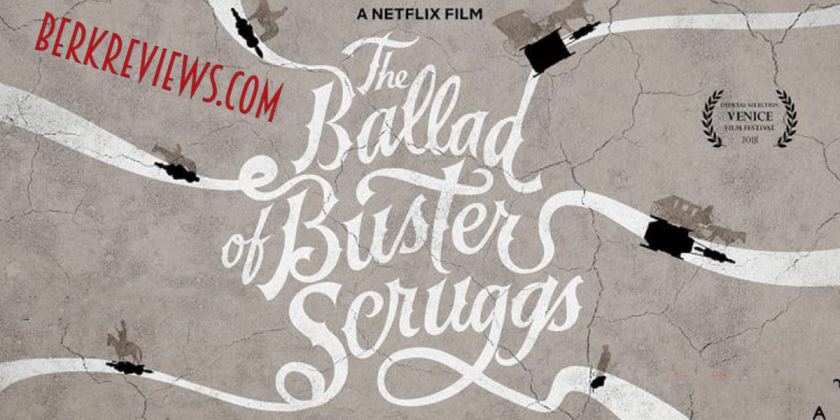 Joel and Ethan Coen tend to make movies that I adore with few exceptions. Their newest film, which happens to be the first Netflix Original for the acclaimed writing and directing brothers – The Ballad of Buster Scruggs (2018) – continues the trend. Unlike their other films, this one is an anthology of six different stories all set in the old west, and is likely paying tribute to the various subgenres of Westerns. There are some thematic elements that seem to link several of them, but all offer touches of the Coen’s style along with excellent performances.

Chapter 1: The Ballad of Buster Scruggs

The first story features Tim Blake Nelson as the titular character, Buster Scruggs. Dressed in all white and singing a song while riding his trusty steed Dan, he hardly paints the picture of an intimidating gunslinger. However, through the usual Coen’s dark sense of humor, we quickly learn that we shouldn’t judge a book by its cover. Nelson is the perfect person to play this character, and he owns every moment of this short. One of my favorite moments of humor is when he walks into the first bar and pats the dust off himself, leaving a dust version of Scruggs standing in front of the door.

James Franco takes the lead in this story as an outlaw with his eyes set on a lone bank out in the middle of nowhere. Inside the bank is a lone teller, played by Stephen Root, who clearly has this isolated job because he’ll do whatever it takes to protect the bank. I had an expectation that this would be my least favorite, as Franco doesn’t usually work for me. I was pleasantly surprised, and found his performance to be nuanced and compelling. However, Stephen Root steals the scene early on as he ever-so-slightly channels Milton from Office Space  in the form of a the squirely teller rambling on about past robbery attempts. There is definitely some dark humor in this short film as well, and lessons of arrogance and greed seem to be emerging.

The tone of the ballads begins to shift with the third entry taking a much more somber and introspective tone. Liam Neeson is setting up a stage in a traveling show as the film begins, which is well-edited and shot gorgeously, and it is soon revealed what the show consists of. A quadruple amputee played by Harry Melling sits on a chair and recites iconic speeches or text throughout history. It’s a surprisingly powerful performance, and the audience at the first show agrees. However, people slowly seem to lose interest, subsequently putting Neeson’s character in a vicarious position. There is no real humor in this story by comparison to the first two, and that continues for most of the other chapters.

Tom Waits has had a big year with his strong performance in the Old Man with a Gun, and now this strong (primarily solo) performance in this film. He plays an old prospector who enters and disturbs a serene area near a stream where he gets the inkling of gold in them there hills. After digging a hole and finding a few gold pieces, he begins the hunt for the “pocket” that will contain his riches. Waits give a strong performance and there are some gorgeous shots, which has been a strong aspect of the films provided by cinematographer Bruno Delbonnel. Again, the theme of greed is prevalent, as Waits is driven to find the wealth so much that he is blind to what is around him.

Chapter 5: The Gal Who Got Rattled

Alice Longabaugh (Zoe Kazan) is about to travel with her brother Gilbert (Jefferson Mays) on the Oregon Trail with his hopes to start a new business and marry her off to his new partner. However, much like the classic computer game, Gilbert dies quickly, leaving Alice with a great many struggles. She reaches out to the men leading the party on the trail, Billy Knapp (Bill Heck) and Mr. Arthur (Grainger Hines), for assistance. This story takes several turns, and is the longest and probably the slowest – but it features a story that won me over. I really loved Alice and Billy, and the connection that the two make.

The humor slightly returns in the final chapter of the film. Here, five characters are trapped together on a carriage bound for a new town. The Englishman (Jonjo O’Neill) and the Irishman (Brendan Gleeson) are business associates, but the other three – Frenchman (Saul Rubinek), the Lady (Tyne Daly), and a Trapper (Chelcie Ross) – are strangers. They regale each other with stories, especially the Trapper who, can’t keep his shut…until it makes a dark and eerie twist. There is much to contemplate with this film, and Gleeson and O’Neill certainly bring a wealth of humor and creepiness to the sequence. It was a good selection to end with.

The Ballad of Buster Scruggs is exceptional. While Chapters 1, 2, and 6 stands out as my favorites, there is something to be taken from each, both individually and collectively. Nelson is undoubtedly the biggest highlight, but there are plenty of other ones to make this film worth your time. Since you likely have your ex-girlfriend’s-second-cousin-on-her-daddy’s-side Netflix password, why not give a quality film a watch? The Ballad of Buster Scruggs earns the Must See rating.