Incredibles (2004) was a film that shocked the cynical college student attitude about animated films right out of me. I’ve always been a fan of comic books and superheroes, but I wasn’t prepared to fall in love with Mr. Incredible, Elastigirl, Frozone, Dash, and Violet when I went to see the film for the first time. So for fourteen years, I’ve waited to see what director Brad Bird would do with these characters in a continued story, and have been eager to find out the details on Jack-Jack. Incredibles 2 (2018) was a blast, and did a lot to build upon the legacy set in the first film.

This film takes place immediately following the events of the Incredibles with the Underminer’s assault on the city. The resulting collateral damage only reinforces the resentment towards superheroes, and the whole family is arrested then immediately released. However, things aren’t looking like they are going to change until Winston Deavor (Bob Odenkirk) and his sister Evelyn Deavor (Catherine Keener) approach Mr. Incredible (Craig T. Nelson), Elastigirl (Holly Hunter), and Frozone (Samuel L. Jackson) about changing the law. A plan is hatched to rebuild the image of the heroes through Elastigirl leaving Mr. Incredible home to take care of the kids. 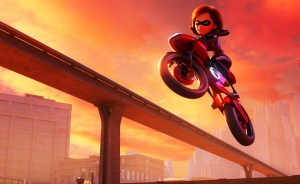 Jack Jack (Eli Fucile) is the absolute highlight of the film. He gets some adorable moments as just a baby sitting on his dad’s chest, who is falling asleep reading him a bedtime story. A little slap on Bob’s face wakes him up, and the story continues. Then there are the moments where Jack Jack’s powers start to show themselves. These scenes create a lot of fun family moments, as his powers continue to shock and scare Bob, Dash, and Violet. This storyline is one of the best elements in the movie, as it creates some of the most comedic instances the Bird offers.

Of course, this is a superhero movie. There must be some great action sequences and a compelling villain to make the movie good. This film has the action in spades, and each arrangement is different enough to stand apart from the others. Elastigirl gets to do a lot of the heavy lifting in the earlier sequences, but all of the characters – including some new heroes – get stuff to do that allows for some cool variations on the sequences. The villain of the film takes a few different shapes, starting with the Underminer, and followed with the Screenslaver. While there aren’t any major problems with these bad guys, there are a few moments that are a little bit on the predictable side. Fortunately, the film does enough to make any of the little hiccups ignorable, and doesn’t deter from the enjoyment of the film as a whole.

Incredibles 2 is…incredible. It’s definitely possible that there is a little rust on the sequel; and again, some may get hung up on the predictability of some of the plot elements. For me, though – this film works, and is a strong follow-up to the first which adds to the legacy of the characters in meaningful ways. This movie earns the Must See rating…now, where did I put my super suit!?