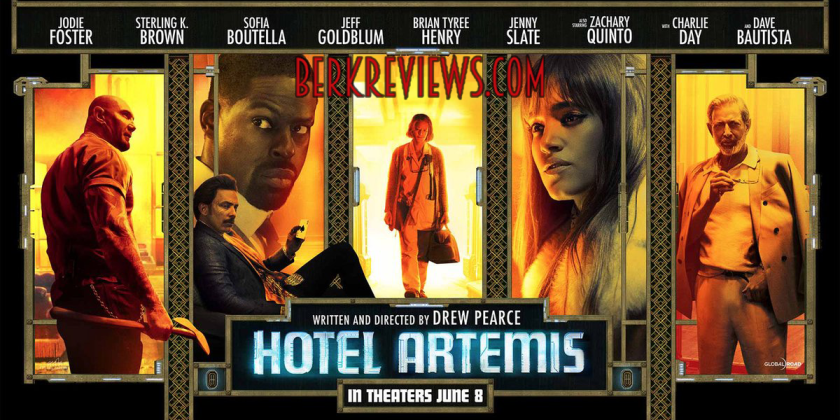 Hotel Artemis (2018) isn’t as action-packed as the premise presented in the trailer promised, but the characters are compelling and the performances by the cast are strong. There are a number of storylines, and the intersection of each runs right through the Hotel Artemis, which is a membership-based hospital for criminals. The Nurse (Jodie Foster) who runs it is having a tough day, as patient after patient continue to arrive, keeping her and Everist (Dave Bautista) – the orderly and muscle – busy. To make things even more challenging, the city around the hotel is in turmoil, as citizens are rioting against the company Clear Water, as they have raised the prices of clean water.

Hotel Artemis has positives but is not essential summer viewing

The film actually opens in the middle of a heist being perpetrated by Waikiki (Sterling K. Brown) and his brother Honolulu (Brian Tyree Henry). Their timetable is limited because of the rioting outside, and they’re forced to improvise. While making their escape, both men take a few bullets and subsequently seek refuge at the Artemis. Upon their arrival, there are two other patients already there – Nice (Sofia Boutella), an assassin who has a history with Waikiki, and Acapulco (Charlie Day), an arms dealer with a chip on his shoulder. It’s worthy to note here that each of the names used within the Artemis is codenames given by the hotel to maintain the anonymity of its clients. Purchase Viagra online http://www.bantuhealth.org/viagra-magic-blue-pill-for-erectile-dysfunction-treatment/ review. 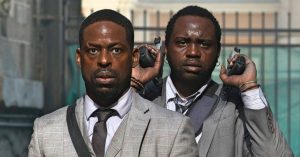 Each character is given a bit of backstory, with Waikiki and The Nurse receiving the most, primarily delivered through fragmented conversations with the other criminals. The riot and medical needs of the characters keep them locked in the rooms of the hotel, and the rules the establishment operates under keeping much of the film very civil. Fans of John Wick will definitely pick up on similarities of the Hotel Artemis and The Continental, but that’s really where the similarities end. Yes, there is a central building for criminals to seek as a safe haven, so long as they are members of and adhere to the rules. However, the action is minimal at the Artemis and is outweighed by the characters that get screen time. Additionally, Hotel Artemis is slightly Science Fiction, as much of the technology is quite a bit more advanced than what we currently have, despite the film seeming to be set in the not-too-distant future. The rules of the hotel are essential to the plot, and The Nurse keeps insisting on them, which makes a choice she must make later in the film all the more crucial. 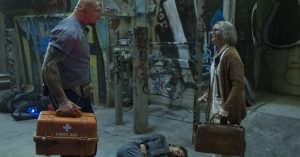 What makes this film watchable are the actors. Bautista is having fun in his role as a criminal orderly who is a healthcare professional. He gives a great speech where he says that healthcare works both ways, meaning he can fix you up or mess you up, depending on your adherence to the rules. Brown has so much charisma even doing very little that he’s ultimately watchable. His calm demeanor on the surface is betrayed by the emotion in his eyes. The devotion he has to his family being his ultimate weakness is relatable and sympathetic. Foster’s portrayal of The Nurse is extremely unique, and her mannerisms craft a compelling character with a clearly rich backstory. The twists and turns the film takes aren’t revolutionary, but make for character interactions that are intriguing and sometimes oddly funny. Goldblum, Day, and Boutella all get some good moments, despite not being the main characters.

In the end, Hotel Artemis is entertaining enough to see on the big screen. It’s definitely not something you need to rush out to see, nor is it going to be some cult phenomenon like John Wick. The film is simply an interesting character study, and almost feels like it would have worked better as a TV series like ER for criminals. Hotel Artemis earns a Decent Watch rating.