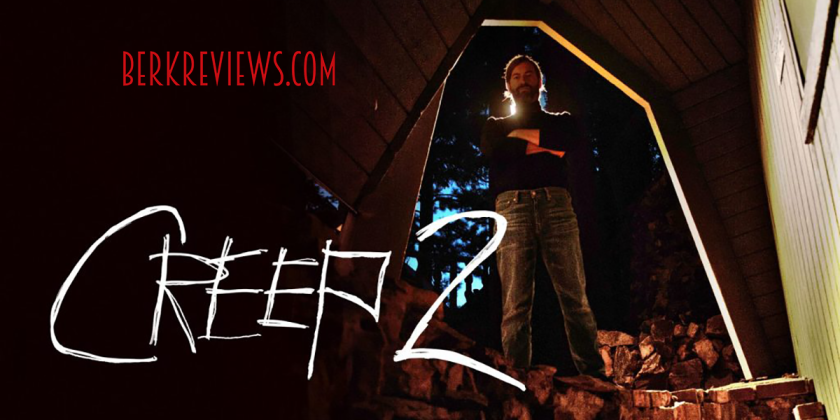 Creep 2 continues following Mark Duplass’s character after the events of the first film. With that said, it’s near impossible to discuss this film without spoiling Creep (2014), which I reviewed back in October.  So, if you don’t want Creep spoiled, do not read the rest of this until you watch the movie first as there will be spoilers for the original film…but I’ll keep most of Creep 2 spoiler-free.

Aaron is a serial killer who lures his victims into a false sense of security or friendship. In Creep, it’s slowly revealed as the film plays out that Aaron is truly dangerous, and not just some weirdo. In this movie, since we know the truth, it starts off with Dave (Karan Soni) – his latest victim – having his throat slit. Yet, he confesses that he’s just not “feeling it” like he usually does…but that’s when Sara (Desiree Akhavan) responds to his most recent request for a videographer.

Sara is a YouTuber with a show called “Encounters”, where she meets up with various people posting ads for companionship. She’s hoping that Aaron will be the subject that finally makes people watch her odd show. Both characters are at a crossroads with their respective “professions”, and are ready to move on until they meet each other. It’s here that Duplass and director Patrick Brice take a positive twist from the first, as Aaron immediately tells Sara he is a serial killer.

Most of the first film is us finding out whether Josef – who goes by Aaron in Creep 2 –  is insane, or just having a laugh at Aaron’s (Patrick Brice) expense. After Aaron gets the ax at the end, it’s clear that Josef wasn’t playing around. Now, using Aaron’s name, he isn’t hiding the fact that he is a serial killer. He tells Sara outright, and even says he’s killed 39 people. She is being tasked with documenting his story, and even promises he won’t kill her for 24 hours. You might think she’s crazy for going along with it, but the truth is she doesn’t even believe him. After he realizes she isn’t taking him seriously, he reverts to his old tricks and storytelling style.

This film, like the first, is shot from our videographer’s camera or other cameras, all of which make sense to the story. It’s the setup of the story that allows the found-footage style of movie to really work. Duplass’s characters (Josef or Aaron or whatever his real name is) are so unsettling that the movie lingers with your once it’s over. The fact that it’s all done voyeuristically only adds to the unsettling feeling the film presents to its audience.

Creep 2 is a compelling sequel, and builds upon what it did in the first. While it’s not one you can just jump into without seeing the original, it certainly doesn’t completely rehash its predecessor. That’s not to say that there aren’t elements from it – but this film definitely adds to the legacy of its lead antagonist. Creep 2 earns the Not Quite Golden, Ponyboy rating.