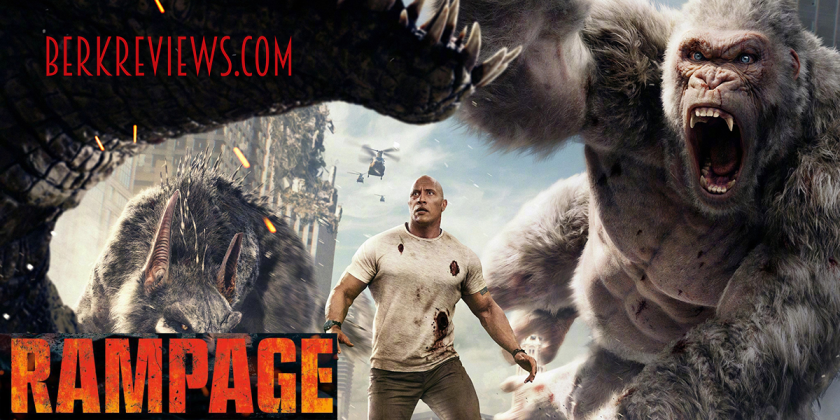 Rampage (2018) reunites director Brad Peyton (San Andreas and Journey 2: The Mysterious Island) and Dwayne Johnson in another CG-fueled action adventure movie meshed with scientific babble. There are moments of this film that are fun, but they are separated by long gaps of people arguing in offices, tents, and laboratories that are tedious, boring, and ridiculous. It does allow the Rock to showcase his charm and muscle, which seems to be plenty for some people, but Rampage lacks the fun spectacle experience that a great summer blockbuster usually offers in place of deep substance.

George, an albino gorilla in a sanctuary, is infected with some sort of experimental viral chemical that crashed landed in his enclosure. Davis Okoye (Dwayne Johnson) has been with George since he was a baby gorilla and is worried about his friend who has had a major growth spurt and broken out of his enclosure. It’s soon discovered that an evil company had broken the law, continuing to experiment with genetic editing and has accidentally infected three animals across the country. All have made a beeline to Chicago, and Davis, accompanied by Dr. Kate Caldwell (Naomie Harris) and special agent Harvey Russell (Jeffrey Dean Morgan), look to thwart the animals and save the city.

George is the best part of the movie. To be fair, he allows Davis some moments, but they are clearly great because of the ape’s personality. He has a twisted sense of humor and manages to surprise the audience and characters with some of his pranks. Sometimes it’s a simple gesture made in sign language, and other times its posturing followed by one of the best chuckles a person could imagine. The trailer spoils a few of these moments slightly, but there is enough left out of George’s big scenes that he still gets to surprise the audience. For instance, one scene in the trailer shows George scaring the new guy, Connor (Jack Quaid), which ends with Nelson (P.J. Byrne) saying “Let’s go change your diaper” after it’s revealed that George was only messing with him. While elements of that clip from the trailer are in the film, the actual scene is quite different, and George’s personality really gets to shine, as does the relationship with Davis. Then…there is the rest of the movie.

The middle of Rampage really drags

There is a three-hour section in this one-hour and forty-seven-minute movie where the giant animals promised in the premise are relegated to side characters. To be fair, there are moments of spectacle here, but they aren’t all that fun. For example, one of these moments finds George awakening on an airplane…you don’t need to be a math genius to know that a giant ape inside a tiny flying capsule hovering in the air adds up to catastrophe.  Another showcases a giant wolf taking on a team of mercenaries led by Joe Manganiello, while another portrays an alligator we saw eat one of the three space containers of the virus earlier in the film…swimming. These scenes aren’t bad, but there is something off about each of them that keeps them from feeling like a good time.

It’s most likely that it’s the story and some of the characters that damage the potential fun. All of the spectacle that the film offers is covered by a shroud of boring science mumbo-jumbo, paired with horribly clichéd villain siblings played by Jake Lacy and Malin Akerman. Their motivation for evil is driven by greed, but that’s kind of the gist of it. Then there is the overbearing, hard-headed military leader, played by Demetrius Grosse, who doesn’t want to listen to Davis and Dr. Caldwell, despite the pleading of Agent Russell. Russell is probably the most fun human character in the movie, as Jeffrey Dean Morgan basically brings his Walking Dead character to this movie, altering him only by giving him a “cowboy” swagger. All the people and all the story elements really drag the film down, tarnishing those fun spectacle moments too much to make them enjoyable.

Rampage isn’t all bad, and the ending sequences have enough action and giant animal mayhem to prevent me from lamenting the lost time of my life I gave to the middle portion of this movie. Dwayne Johnson is always charming and manages to make the most of his screen time regardless of the material. The rest of the movie is definitely not worth the time of day, earning it the Not a Total Waste of Time rating.