Blockers (2018) looked like it was just going to be a stupid, raunchy comedy that you could go in and maybe have a few laughs. However, the film, with the directorial debut of Kay Cannon, is actually full of a lot of heart and just a few laugh-out-loud moments, resulting in a much better movie than expected. Another misleading element of the trailers is that the three daughters have a more prominent role, and really are the standouts of the movie.

Blockers is a comedy about sex that actually has substance

Julie (Kathryn Newton), Kayla (Geraldine Viswanathan), and Sam (Gideon Adlon) have formed a sex pact to lose their virginity at their prom night. However, Julie left her laptop open…and now her mother, Lisa (Leslie Mann), along with Kayla’s overprotective dad, Mitchell (John Cena), and Sam’s estranged father, Hunter (Ike Barinholtz), are on a mission to protect their daughter’s virtue. Both groups have a clear objective, and things they need to work out with each other and the members of the opposing group. 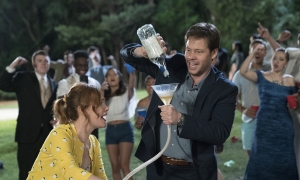 One issue that this movie has is wasting some of the cast’s diverse talents. The three parents that the film focuses on are White. Yet, Hannibal Buress plays Sam’s stepdad, Frank, who barely gets any screen time. This has been a trend with mainstream comedies, casting the extremely talented comedic actor and not using him enough, though he often manages to steal the show – like in Daddy’s Home. Possibly more of a travesty is the underutilization of Sarayu Blue as Marcie, who is Kayla’s mom and Mitchell’s wife. She gets to point out the double standard the three parents – and possibly a more conservative audience – have in attempting to stop the three girls from losing their virginity, but would have no issue if it were boys in the same position. Both of these talented actors get very little screen presence, and I would have loved to see them get used a bit more.

Nevertheless, the film does more than one would expect when looking at the poster with an outline of a rooster over the word “Blockers.” Who would go in an expect a story of a girl afraid to admit her sexual orientation to her friends and family, the insecurities of a father watching his little girl become a woman, the fear of pursuing one’s own dreams at the risk of hurting someone you love, and the opposite side of that last one: loving someone so much that you’re not sure who you’ll be if they aren’t around? These issues are real in this movie and aren’t just used for cheap punchlines. It was a refreshing element to a big budget Hollywood comedy that definitely blindsided me, as well as the audience.

It’s not to say there aren’t any funny moments in this film. The three girls have a great chemistry, and their silliness and interaction with their dates are often very funny. Viswanathan stands out as having the biggest comedic chops of the three, and the strength of her character, which is echoed in both of her parents, is laudable. The adults also have a good chemistry, but their friendship is much more flimsy. This plays a role in the story and offers a satisfying arc at the end.

While I didn’t laugh as much as I had expected, Blockers left me with a surprise sentimentality and story satisfaction that I never saw coming. It’s definitely a film that manages to find a balance between raunchy comedy and family values, unlike many others. It definitely feels like this generation’s American Pie with a bigger point to make then just male friendship. Blockers earns the Not Quite Golden, Ponyboy rating.