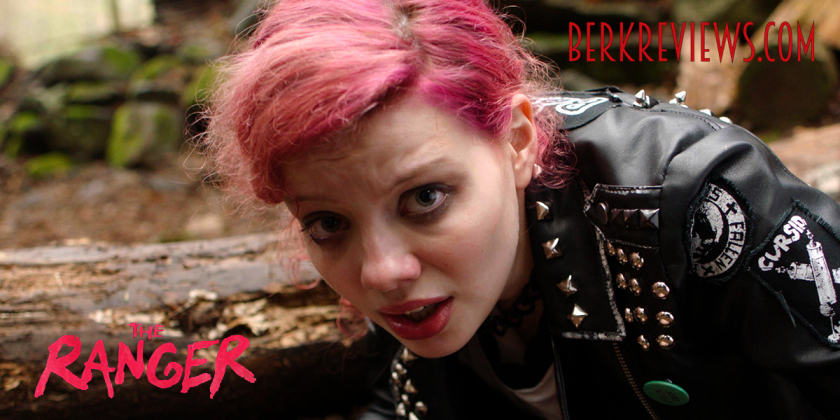 The Ranger (2018) is a fun throwback to eighties horror. It takes a little while to really get to the horror part, but once it got there, it was pretty rewarding. Director Jenn Wexler spoke before the screening and said she’d been asked when the film takes place. She answered “not when but which dimension,” and specified it was “‘80’s dreamland.”

The Ranger was a fun throwback to campy ’80s horror

Chelsea’s (Chloe Levine) punk boyfriend Garth (Jeremy Holm) and their friends are on the run after an altercation with the local police. Garth tells them that Chelsea has an old family cabin in the woods that would be a great place to lay low. However, Chelsea has bad memories at that place, and the local Ranger who rescued her as a child still protects the woods and doesn’t like these dumb kids being in his woods.

Jeremy Holm plays the part of the ranger, and feels like a combination of Bruce Cambell and Patrick Warburton. He takes joy in his role as he torments the punks with rules and pain. Holm’s intensity really adds to the premise, and makes the last twenty minutes really pay-off the premise of the film.

Levine is a strong lead performance and has enough charisma to win the audience over. She’s vulnerable early in the film, but has to demonstrate great strength as the story goes on. The rest of the cast performs well, and none of the dialogue feels particularly poorly delivered or cheesy. Even when the punks are acting obnoxious towards Chelsea or any authority figure in the traditional cliché way, the characters are believable.

The weakest element of the film felt like the explanation of the childhood tragedy that begins the film. We know right away that something had happened, as the ranger tells young Chelsea that she’s a wolf. The film flashes back throughout the film, but its explanation is a little confusing. It feels unclear exactly what happened, or at least why it happened, which could be the point Wexler is making.

Either way, The Ranger was very enjoyable. It’s short and delivers on the premise pretty well. Levine and Holm give great performances, and Wexler has a good command of the camera. The Ranger earns the Decent Watch rating.