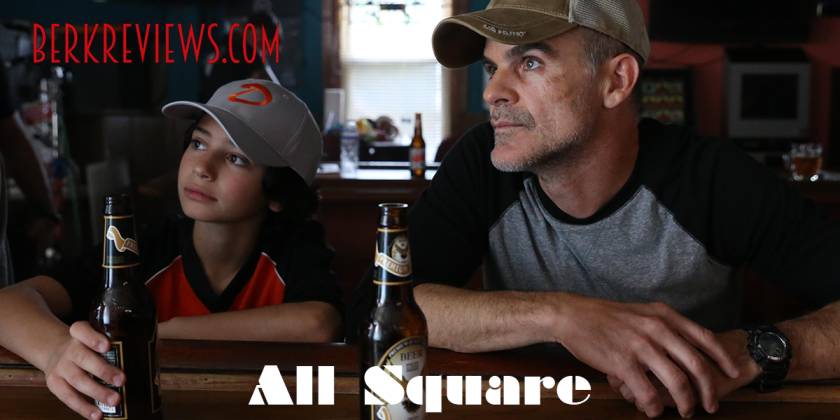 The beauty of being at a film festival for days is you hear about films that maybe hadn’t been on your radar. All Square (2018) was a film I’d considered seeing, but was willing to skip initially. However, I’d overheard some people speaking about it throughout the week, and decided to make an effort to catch it…turns out that I’m very glad I did.

John (Michael Kelly) is a former baseball player turned bookie in his small town, but business is slow during the summer. He runs into an old high school sweetheart, but ends up befriending her 12-year-old son Brian (Jesse Ray Sheps). Brian asks John to come to his little league game, and John gets the idea to start taking bets on the kids’ baseball teams.

Kelly is absolutely terrific in this role that seems like it was written for him by Timothy Brady. John is a no-BS guy who tells it like it is. Early in the film, we learn that he breaks into houses of people who owe him money to take something to help cover their debt. It’s done comically as he ends up taking a person’s dog, which is what makes his choice to help Brian so interesting.

The movie hinges on this relationship, so had director John Hyams cast a different actor to play the role of Brian it may not have worked. Sheps plays Brian perfectly. He has a few scenes where he really demonstrates his skills. The best is seen in the promotional photos where John takes Brian to the bar. He buys the kid a beer and allows him to bet on a horse. It’s a sweet scene, and it is at the highest point of their relationship.

All Square was extremely funny and cynically heartwarming. It’s not sappy at all, but a man who operates outside of the law finding something to care about definitely brings a smile to my face. This film is certainly a joy to watch, and I have the feeling that it’ll hold up with subsequent watches. All Square earns the Not Quite Golden, Ponyboy.