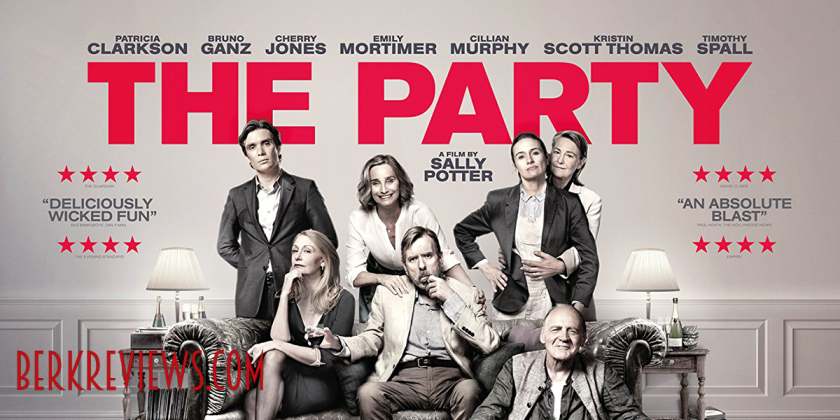 Why not invite some of your favorite actors to a special evening? It’s clear that writer and director Sally Potter had this idea in mind when casting The Party (2017). The film relies heavily on its excellent cast, in as it feels like a play having its characters move from room to room in conversations or casting insults towards one another. Much like a party only serving hors-d’oeuvre, there is enough here to keep the audience engaged, but still feel like they need a little more.

The Party has a strong cast who give good performances 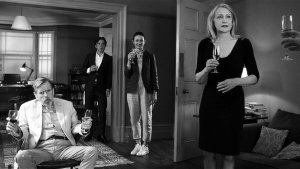 Janet (Kristin Scott Thomas) has received a promotion at work, and is hosting a party to celebrate. However, it doesn’t take long for many of the guest to arrive to see that the night isn’t going to be an easy one. Her husband, Bill (Timothy Spall), seems out of it, and the guests all start to question what’s wrong. Of course, each guest has their own issues they’re also working out with other members of the guest list.

Cillian Murphy shows up in this film, and that’s always a sign of a good time. His role in the film is vital, though he shows up a bit late in the group. He is a standout – and his performance is quite big at times – but it works, given the nature of his character. It’s not long after he joins the get-together that he’s doing lines of coke off the bathtub. If that’s not a sign that this film gets pretty crazy, then the opening shot must have been missed. 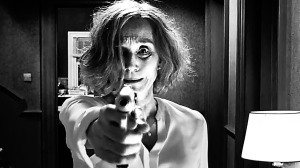 This film suffers from a current trend in films: the cold open. That’s where you start somewhere in the story before the opening credits or title and then return to the proper starting point. Later in the story, you’ll catch up to that first teaser image you saw. It’s becoming a common trope, and rarely adds anything to a film. It doesn’t here, either, other than setting up that Janet is going to point a gun at someone, eventually. This choice by Potter hurts the story slightly as it lets you know where the evening will eventually go, which could have been an enjoyable, organic surprise.

The Party was entertaining at times, and the frantic nature of the characters makes the runtime move quickly. However, it’s also not a film with too much substance or relevance to anything that I was able to pick up on. There is definitely some commentary about British politics that I knew nothing about, so maybe it’s on me. The Party earns the Decent Watch rating.