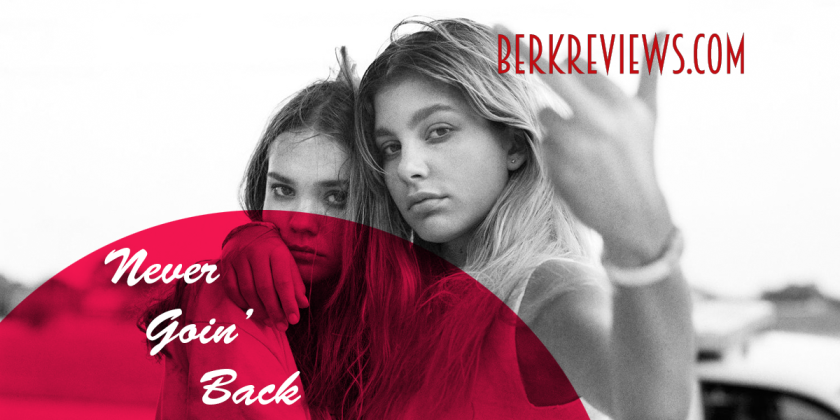 Never Goin’ Back (2018) is a film full of funny moments with characters that are making bad choices that you can’t seem to stop rooting for. Writer and director Augustine Frizzell crafts a story of two teenage best friends that work as a buddy love story which feels very now. The cast performs very well, and the film reminds me of movies like Friday, Dude Where’s My Car, or even Wayne’s World with the friendship that is on display. This is definitely one that could offend certain people, but if you don’t mind swearing, it’s a solid film.

Jessie (Camila Morrone) and Angela (Maia Mitchell) are high school dropouts who truly seem to just need each other. Angela has purchased them a beach trip getaway, but used their rent money to do it. The girls have a plan to still pay rent…but plans don’t always work out as expected.

Both Morrone and Mitchell are excellent in this film. They have lots of chemistry and come off as genuine in the portrayal of their characters. A standout scene happens in a grocery store, when a customer decides to condemn the girls for their clothing and Angela’s sampling of a few peanuts. Angela snaps and delivers a tirade to the older gentleman that initially had my jaw fall slack only to tighten again in order to allow laughter to form that would soon pour out of me. It was such a memorable scene, and the insults she throws at him are piercing.

There is a subplot focused on Jessie’s brother and his “squad” as they are also in need of money. The plots converge in a very satisfying way, though it easily could not have. Had Frizzell opted to take a more Richard Linklater approach and just shown a slice of life of these two girls, the film would have still been compelling. However, her choice of the story makes the film more intriguing, as the stakes are raised each time and the choices they make seem believable, despite it causing more problems in most cases. Plus, the elements that Frizzell sets up all pay off in often hugely comedic ways.

Frizzell spoke to the audience before the film and had clearly been upset by some of the reviews. As a critic, it made me sad to see the impact our words can have on the artist. The things we write should always be truthful to our point-of-view. Much like filmmakers, every time I write anything there is a chance someone will attack me for what I’ve put out into the world. It’s a risk everyone takes whenever they publicly display anything they’ve done. Fortunately, I really enjoyed this film, and found myself asking how anyone could perceive the characters to be “slutty,” which was one of the criticisms apparently leveled at this film. Never Goin’ Back earns Not Quite Golden, Ponyboy rating.