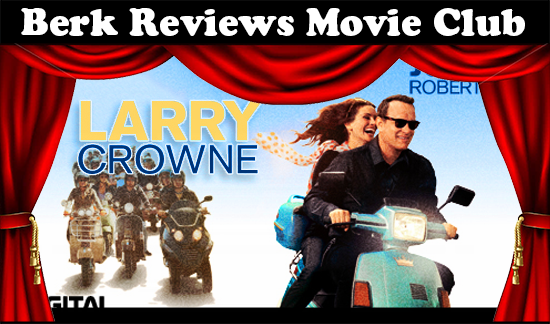 Corey (@coreyrstarr) picked the Tom Hanks written, directed, and starring vehicle Larry Crowne (2011) for our third film for the romcom theme of February. Neither her nor Jonathan (@berkreviews) had seen the film before and both love Hanks! The film also stars Julia Roberts, Cedric the Entertainer, Taraji P. Henson, Wilmer Valderrama, Gugu Mbatha-Raw, and Rami Malek. It’s a film with flaws, but one that has tons of charm.

Next up for Movie Club: About Time

Two years ago, while Jonathan was in the middle of his 7-in-7 challenge, a co-worker suggested the film About Time (2013). Jonathan purchased it then but has still not seen it. With mounting pressure from that co-worker, Jonathan and Corey will venture into this film directed by Richard Curtis and starring Domhnall Gleeson, Rachel McAdams, and Bill Nighy.