Marvel Studios has been able to keep their movies feeling fresh starting with Captain America: The Winter Soldier. Part of their success has definitely been allowing directors and writers, like Taika Waititi and James Gunn, to shape the films and their stories to match their style. Ryan Coogler, who directed Creed (2015) and Fruitvale Station (2013), has managed to elevate his own style while bringing an amazing cast, social issues, and awesome characters to the Marvel Cinematic Universe. Black Panther (2018) stands out for many reasons and is definitely a powerful entry to the ever-growing Marvel library. 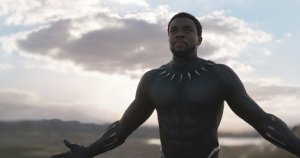 T’Challa (Chadwick Boseman) returns to Wakanda to ascend to the throne after the death of his father (spoiler for Captain America: Civil War). Wakanda appears as a small, third-world nation in Africa, but is actually a hidden, highly advanced technological civilization thanks to their vast supply of Vibranium. An old nemesis of Wakanda, Ulysses Klaue (Andy Serkis), is still out in the world tracking down Vibranium with a young mercenary named Erik Killmonger (Michael B. Jordan). Yet, that’s not really what this Black Panther is about.

This film manages to bring lots of modern social issues into the MCU by framing the major conflict at the feet of the new king. Wakanda hides its truth from the rest of the world because the weapons they have are so dangerous and powerful that if they were to fall into the wrong hands, the world would forever be changed. However, the technology isn’t only used for weaponry – many of the devices made by Wakandans, especially his sister, Shuri (Letitia Wright), would revolutionize the medical world. Thus, the real conflict is about the future of Wakanda and is it T’Challa’s job to simply protect his people or attempt to reach out and help the rest of the world. In essence, he is dealing with xenophobia, global trade, immigration, and the role of a country in regards to the rest of the world.

Coogler and co-writer Joe Robert Cole taking a lot of the conflict away from an external source is a powerful storytelling step forward for a “superhero” movie. That might lead you to believe that this film features a similar problem many of the other Marvel movies are afflicted with: bad villains. Fortunately for both the audience and Coogler, this film crafts one of the best villains in the MCU in Killmonger. His motivations are clear and justified to the point that he manages to garner some empathy from the audience. Add that fact that he is every bit an equal to T’Challa, and a quality villain you now have. He also represents a stance seen heavily during the civil rights movement, but I’ll leave the details out as to avoid potential spoilers.

It’s not just the male characters who get to shine in this film either. Okoye (Danai Gurira) is the head of the royal guard but is also a strong friend and ally to T’Challa and his family. She is a powerfully awesome character, and Gurira is perfectly cast in the role. Nakia (Lupita Nyong’o) is a love interest, but Coogler writes her with her own goals and ambitions. She isn’t there strictly to serve T’Challa or be subservient. Ramonda (Angela Bassett) is T’Challa’s mother and emanates strength and nobility. Not to downplay performances from Forest Whitaker, Daniel Kaluuya, and Martin Freeman, who all have an important part to play – they are excellent additions to an already strong cast.

Coogler’s first two films are very grounded in reality, and both star Michael B. Jordan. It was surprising to see him jump into such a CG-heavy property, but he pulled it off quite well. There are a few moments where the CG is glaring and not as good as one would expect, which was a problem in Thor Ragnarok as well, but ultimately looks pretty amazing. The Black Panther suit design, costuming, and Wakanda itself are all impressive. The action scenes are engaging and competently shot and edited, though it does get a bit visually overwhelming at times. Continuing with the technical elements, the soundtrack by Kendrick Lamar stands out as a major highlight, too. The songs fit perfectly when used within the film, and blend the traditional African stylings with the futuristic technology of the movie’s world musically in the same way that Coogler does visually.

There is a lot to celebrate about Black Panther. The crowd I was with at my screening broke into applause several times throughout the film. I’ve always found it odd when a movie audience chooses to applaud at a film, but it was even odder to do it throughout the movie. However, Coogler’s film makes you want to cheer, and I found myself powerless to stop my hands from joining in the cacophony of celebration. Black Panther earns the Must See rating and moves high upon my list of favorite Marvel movies.