I have skipped many of Liam Neeson’s action films. I’ve not been Taken on an Unknown, Non-Stop Battleship that would Run All Night. Yet, for some reason, I couldn’t stop myself from getting on this stupid train. The Commuter (2018) is another action vehicle for Neeson – who I do think is an excellent actor – with some bad close-quarter fight scenes and one pretty crazy action sequence towards the end that is quite the spectacle. The story was slightly intriguing, but it doesn’t quite add up to a satisfying conclusion. 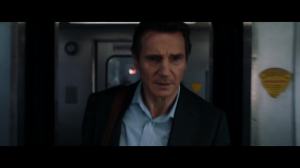 Michael MacCauley (Liam Neeson) is an ex-cop turned insurance salesman who just found out he’s been fired. He is approached by Joanna (Vera Farmiga), who is an unfamiliar face on his familiar ride home onboard the commuter train he has taken daily for ten years. She offers up a hypothetical situation where he would receive $100,000 to find a specific person on the train and point them out to her employers. He soon finds out that it wasn’t as hypothetical as she presented, and he has no idea what exactly he has gotten into.

Are you wondering if they kidnap a family member? Don’t worry, they do. Are you curious as to if he has a unique set of qualifications that may prove beneficial in this particular situation? I assure you that he does. Are you wondering if this film is a part of the Conjuring extended universe since both Vera Farmiga and Patrick Wilson are in this film? Well…it’s not.  Too bad, because, that may have made this movie a little more memorable. As is, this Jaume Collet-Serra (who also worked with Neeson on Run All Night, Non-Stop, and Unknown) film is predictable, and a little bland. The biggest complaint is the two fight sequences look very CG, or at least sped-up to make them feel more exciting. If anything, the effect took me out of the film and had me trying to figure out what exactly was happening on the technical side.

The weakest part of the film has to be the third act. Enter the big spectacle one expects from an action movie: it is pretty epic, but it still has that roll-your-eyes quality about it. If that were the biggest piece of cheese, it may have ended pretty well. However, the big mystery of the film comes to a breaking point only to be met with a giggle-inducing twist. It’s not the worst thing in the world, but it didn’t feel quite as cathartic as was likely intended.

While I wasn’t a huge fan of The Commuter, the audience at my screening didn’t seem too disappointed. I would have loved a little more action, but I was entertained for the most part, even though I immediately saw the direction the story was going. There wasn’t anything particularly great or terrible about the film, earning The Commuter the Decent Watch rating.