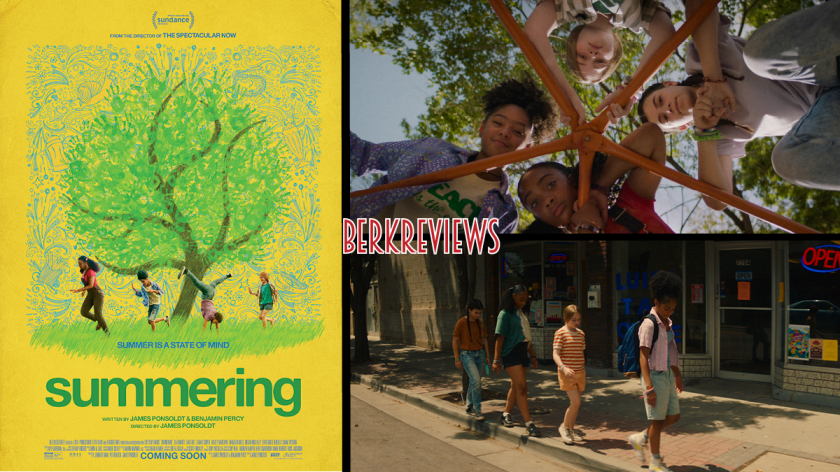 Sometimes, you watch a movie and struggle to figure out what it says about a given topic. Other times, it is evident what the message is, and it is articulated quite well. Yet, every once and a while, you can tell what a movie is trying to say – and then you sit flabbergasted at the pile of nonsense it threw in there for no apparent reason. Like, if you asked someone to take the concept of rambling and turn it into a movie, then Summering (2022) would be it.

We can all relate to the idea that growing up is hard – especially the last week before starting middle school. These four best friends – Daisy (Lia Barnett), Lola (Sanai Victoria), Dina (Madalen Mills), and Mari (Eden Grace Redfield) – are struggling with their relationships with their families, and all the things that come with starting middle school feel like the weight of the world.  As the girls return to their favorite spot in the nearby woods, they discover a grim surprise. Instead of calling the police or telling their parents, they decide to take matters into their own hands.

I’ve liked some of James Ponsoldt’s movies prior to Summering, but this film didn’t work for me at all. The story beats feel so random and chaotic. The dialogue is clunky, with many of the lines feeling like no person would ever say those words – especially when you consider their timing, and how they are uttered. There are some striking visuals in the film, and some of the stagings of the characters make for some memorable shots. It’s what happens in these visuals that are so surprisingly odd, that it ultimately makes for an unpleasant viewing experience.

We learn that these four girls are best friends, and each have some very specific quirks. There is a lot of expositional dialogue to keep up with, so some of the details become fuzzy. All of the coming-of-age stuff feels secondary because of the big mystery they are trying to unravel…only sometimes, they seem to forget that there is a mystery. That element of the story that seems inspired by an iconic ‘80s coming-of-age film feels like it should be much more crucial to the overall film than it ever becomes. Ponsoldt’s film is allegorical, and was written in response to COVID…however, it doesn’t really feel like an idea congealed as much as it feels like a stream of consciousness.

Summering may work for some, but it didn’t for me. I was ready for the film to end, and many of the moments that should have been major beats in the story were either so silly or so quick that there really was no emotion. In fact, the only time I got an emotional connection was at the beginning of the film when the girls were talking about how sad it was that summer is ending, which got to me because my day job is as a teacher, and when I watched this my summer was ending. Summering earns the Avoid like the Plague rating.