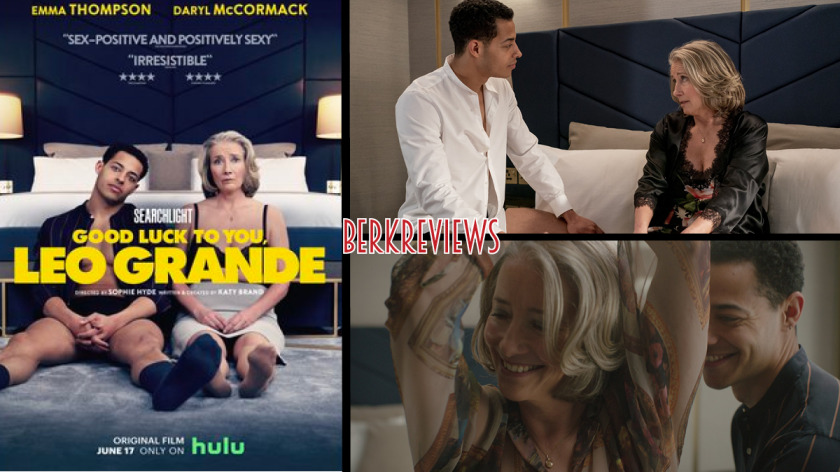 Director Sophie Hyde and writer Katy Brand have brought us something special with Good Luck to You, Leo Grande (2022). In this rare treat of a film, two actors are given the chance to really talk and discuss topics from our reality, and flesh out their characters. These two actors, Emma Thompson and Daryl McCormack are up for the task, and create two fully realized people who the audience will surely be connected to by the film’s climax…pun intended.

Nancy (Thompson) is a retired school teacher who has never known good sex. Being the organized person that she has always been, she sets out to hopefully correct that inexperience. The solution is to hire Leo Grande (McCormack), a young and very attractive sex worker, to meet her in a hotel room. Of course, in order to get to the sex, Nancy must find comfort with Leo and herself.

There is so much sex positivity in this film, and it is a prime subject for discussion amongst the characters. Leo brings up some of his other clients and has the ability to effectively help lower Nancy’s defenses. She brings up a quite prudish and judgemental attitude about people and sexuality upon their first meeting but shows a desire to break free of the chains that have always held her back. The ideas of regret and repression are found in the dialogue and grabbled with excellently by the writing and the performances.

The film also addresses our own self-image versus what society has trained us to expect. Even the gorgeous Leo, whose chiseled body screams fashion magazine model, seems to look at himself in the mirror with doubt and judging eyes. Thompson, who is in her 60s and still stunning, allows the film to address many of the things that we know are true about Hollywood and the treatment of older actors and actresses through her. There are several moments that we will think of as brave because of such standards and expectations, but the film’s text reminds us that each and every one of us is beautiful. There is no one way we should look, and it is that variety that makes the world such an exciting place to live in.

My favorite scene of the film doesn’t involve any dialogue, but there is still a lot being said through the performance. Leo suggests that they should dance, in order to get a little more comfortable and have some fun. He puts on some music and slowly works his way to her. She is clearly nervous and keeps her arms very close to her side as she barely wiggles side to side. As the scene goes on, we are seeing the caterpillar turn into the butterfly as it wiggles out of the cocoon and spreads its wings. Thompson’s performance is so subtle and nuanced, yet it clearly shows so much of what her character is going through in these moments.

While I know not everyone is a fan of movies with so much talking, I found a lot to take away from Good Luck to You, Leo Grande. In a few ways, this movie reminded me of My Dinner with Andre (1981), if Wallace Shawn had had an orgasm over the desert at the film’s conclusion.  Good Luck to You, Leo Grande earns the Not Quite Golden, Ponyboy rating.