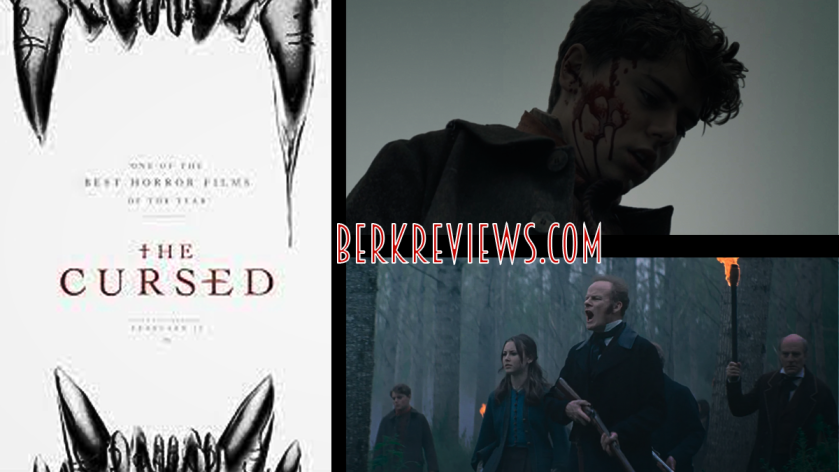 The Cursed (2021) begins in the trenches of WWI. An attack takes place, and one commander takes several bullets in the stomach. While being treated in the medical tent, the doctor removes several bullets – and one unexpected bullet in particular. The doctor notes the silver bullet he discovers isn’t of German origin. We then cut to a woman entering an estate and inquiring about the health of the occupant, before the film jumps back 35 years.

Seamus Laurent (Alistair Petrie) and the elders of their settlement are not willing to give up their land to the Roma clan, who has a claim staked. They hire mercenaries to clear them off, and the slaughter is intense and brutal. A curse is set on their land and people, and soon everyone begins having nightmares. After a boy goes missing and another is found dead, the townspeople suspect a wild animal – but a visiting pathologist, John McBride (Boyd Holbrook), has experienced this before. He knows it’s something much worse.

Holbrook is really great in this movie. McBride becomes the protagonist once he enters into the mix. He is the expert who knows all about the monster the townspeople find themselves facing. It is a common trope in a horror film, but one that works really well in this scenario. His tragic past is initially alluded to, but becomes a great source of empathy later in the film. Kelly Reilly doesn’t get as much to do early on, but she becomes essential later on in the story.

The atmosphere is definitely one of the biggest highlights of the film. It looks creepy, and feels like a nightmare from the get-go. Once things get going, the atmosphere really helps sell the horror. The dead trees and the mist/fog/smoke are horror 101, but if it works it works.

The Cursed was a very compelling horror film full of solid performances and a familiar theme. Those versed in the monster movie will be pleased with this entry in the genre. There is even an opportunity for compelling world-building and possible sequels if this does well. The Cursed earns the Not Quite Golden, Ponyboy rating.