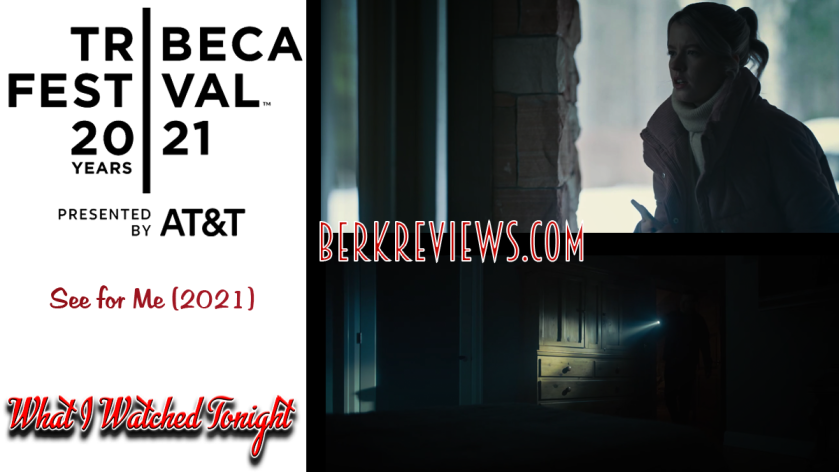 The home invasion subgenre has become steadily bogged down with conventional and contrived efforts over the years but it’s a subgenre that, when all the parts connect together, can be brutal, nerve-shredding, and oh-so effective – still, it’s becoming harder to top 1967’s Wait Until Dark. The second feature from director Randall Okita, See for Me, takes the idea of home invasion and adds a blind protagonist (a la Wait Until Dark) but this time the location is unfamiliar to our lead in order to shake things up a bit. In recent years, Mike Flanagan gave us Hush which focused on a deaf writer being stalked in her home and turned out to be fairly effective so could See for Me repeat the trick?

Not entirely, no. The premise is entirely intriguing, especially as our protagonist Sophie (Davenport) is pushed further out of her comfort zone by being in a sprawling, remote mansion on a cat-sitting job in an effort to make money and to keep herself motivated. When the movie gets going after around twenty minutes, there is a real promise that See for Me is going to be a heart-pounding thrill ride but this never comes to fruition due to frustrating writing, smartphone magic, and a third act that descends into near-absurdity. Throughout her ordeal, Sophie uses an app called ‘See for Me’ which allows the user to connect remotely with a volunteer who essentially acts as that person’s eyes and allows them to maneuver their surroundings safely. Thankfully, Sophie connects with Kelly (Kennedy) who is a first-person shooter pro and an army veteran to boot – both of which obviously come in handy when the stalking and shooting begin. Whilst the idea is solid, the execution feels unrealistic and the sequences themselves didn’t carry the required tension as the antagonists were, frankly, a bit daft. When the third act comes and is rushed through, the tension had dissipated entirely.

Davenport is decent enough in the lead but I couldn’t connect with the character of Sophie due to her heightened stubbornness. Whilst I understand the need and want for independence, the portrayal felt too antagonistic to be fully effective. Okita uses an interesting tactic with the character by not fully having her be helpless or indeed against her stalkers at times but this becomes lost as the movie progresses. See for Me does, however, look stunning. DoP’s Jackson Parrell and Jordan Oram combined to create a visually beautiful movie that fully captured the bleakness of the surroundings, the hollowness of the mansion and also delivered some breathtakingly inspired shots using interesting camera angles and techniques. Nothing about this movie looks bad. The score is composed by Melanon and is one I enjoyed but I think I would prefer to listen to it in isolation as it didn’t always seem to fit with the on-screen happenings.

See for Me had the potential to be a really effective thriller and, at times, was heading that way but it begins to unravel once the action and actual home invasion begin leading to a disappointing finale and a nagging sense of ‘what could have been’.