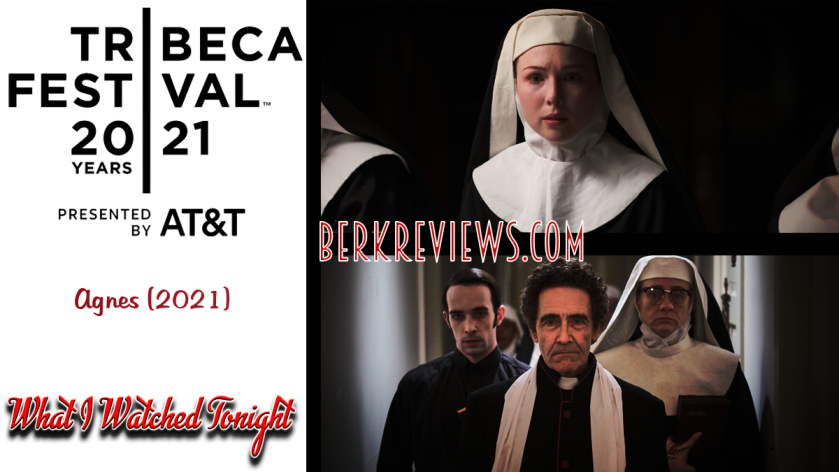 From director Mickey Reese comes Agnes, a horror drama focusing on a young nun, Sister Agnes (McFarland), who, whilst in the supposed safety and sanctity of her convent, is seemingly possessed by a malevolent, demonic force. That’s what you’re led to believe judging by the synopsis and marketing tools, however, Agnes is far more than just a simple crude, bombastic exorcism flick. Instead, Reece delivers a drama centered on the grief and loss felt by Agnes’s friend and fellow nun, Mary (Quinn), during and after the events within the convent.

The first half of the movie is more your typical creepy, atmospheric exorcism movie, Reese blending solid pacing, stark imagery, and religious iconography to create an effective backdrop for some sequences of decent and tension but also standard horror moments – it’s these moments, however, that feel a little cheap and cliche in a movie that ultimately strives to be more than just that. When the turn comes, Agnes changes tone, direction, and genre drastically and much of Agnes’s story is left behind in favour of Mary’s personal story though the two are inextricably linked. During that second half, the movie becomes slightly less interesting to look at and does begin to drag the further into it we get.

What Agnes does deliver on is a collection of solid performances. Molly C. Quinn delivers a quiet performance that exudes pathos, capturing the internal grief her character is feeling and projecting it outwardly – it’s just a shame that the overall character of Mary was entirely engaging. It’s Quinn that really becomes the lead but she is backed up by good supporting turns from Gunn, Horowitz, and McFarland as the possessed titular character tasked with frothing, swearing, and, well, assaulting those around her.

If you’re watching Agnes for a horror-fuelled exorcism romp, you’ll be sorely disappointed as that was never really the desire of Reese. Instead, Agnes becomes a slow-burning focus on the loss of one’s faith (if it was ever really there), the loss of loved ones, and, indeed, the need for inclusion in a strange world. The changing of direction was certainly a bold idea, however, narrative decisions throughout, an uneven tonal balance, and an ultimately meandering pace prevent Agnes from hitting quite as hard as it intended to. Come for the sweaty exorcisms, stay for the personal drama, prepare to be slightly underwhelmed.