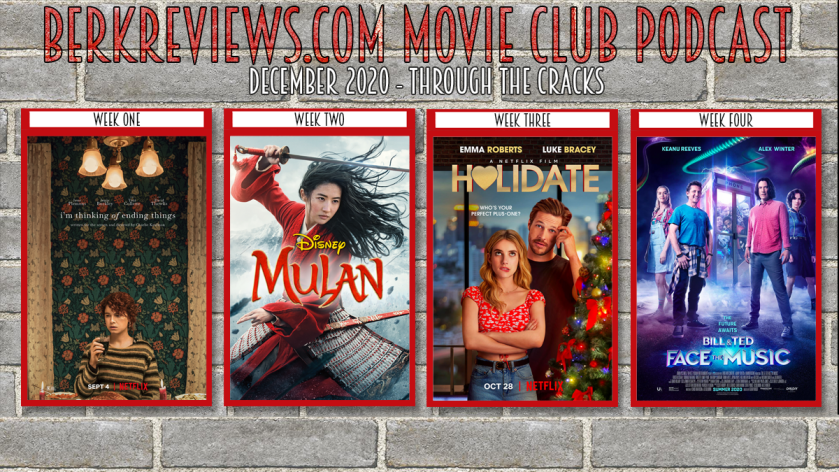 September 2021 has lead Jonathan (@berkreviews) and Corey (@coreyrstarr) to look outside the majority of the Hollywood system. This month, all of the movies are featuring more diverse casts, stories, or directors. Following the normal guidelines for the selection of the movies, the two looked for films they hadn’t seen but for some reason piqued their interest.

Netflix has been the home of many new releases this year, but this Charlie Kaufman film was one Jonathan had been excited to see. Still, I’m Thinking of Ending Things (2020) came to the streaming service on September 4th and went unwatched by him until now. Starring Jesse Plemons and Jessie Buckley, the synopsis of the film reads “Full of misgivings, a young woman travels with her new boyfriend to his parents’ secluded farm. Upon arriving, she comes to question everything she thought she knew about him, and herself.”

Mulan came out the same day as I’m Thinking of Ending Things, but Disney+ required an additional $30 plus the subscription fee for people to see it. Considering Corey and Jonathan have no attachment to the original animated feature, they decided to wait to see it. Now it is just included with Disney+ so it is a perfect fit for the theme. Directed by Niki Caro and starring Yifei Liu, Donnie Yen, and Li Gong, Mulan’s plot summary reads “A young Chinese maiden disguises herself as a male warrior in order to save her father.”

Jonathan is a sucker for Christmas movies and Rom-coms so Holidate was up his alley. Despite it coming out on October 28th, this film is about two strangers who are simply fed up with being single on holidays agree to be each other’s platonic plus-ones all year long, only to catch real feelings along the way. Directed by John Whitesell and stars Emma Roberts, Luke Bracey, and Kristin Chenoweth.

The return of Keanu Reeves as Ted and Alex Winter as Bill was enough to lore Corey to give this a watch. Jonathan saw this in the summer, but is ready and willing to see it again. “Once told they’d save the universe during a time-traveling adventure, 2 would-be rockers from San Dimas, California find themselves as middle-aged dads still trying to crank out a hit song and fulfill their destiny.”