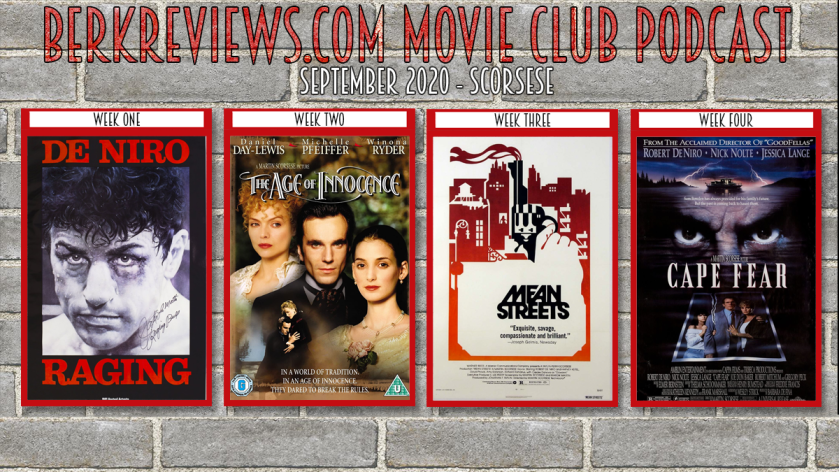 September has Jonathan (@berkreviews) and Corey (@coreyrstarr) focusing on an iconic director: Martin Scorsese. While Jonathan has seen some of the big films of Scorsese’s extensive filmography, there are a few he still wants to check off his gap list. Corey has explored it even less so there are plenty of major titles for them to watch for September 2020.

Jonathan went for the knockout punch with his choice for week 1. Raging Bull (1980) is on the top 100 films on the AFI list and is arguably the biggest Scorsese film he hasn’t seen. Starring Robert De Niro, Cathy Moriarty, and Joe Pesci, the film showcases the story of real life boxer Jake La Motta. A tough film at times but one that demonstrates Scorsese’s brilliance time and time again.

Corey picked The Age of Innocence (1993) mainly because of the cast. It stars Daniel Day-Lewis, Michelle Pfeiffer, and Winona Ryder, who is one of Corey’s favorites. IMDb.com plot synopsis reads “A tale of nineteenth-century New York high society in which a young lawyer falls in love with a woman separated from her husband, while he is engaged to the woman’s cousin.”

Mean Streets (1973) is one of the earliest on Scorsese’s filmography, Jonathan has been meaning to check this off his list so now is the perfect time. This film stars Robert De Niro, Harvey Keitel, and David Proval. It’s a simple premise reading as “A small-time hood aspires to work his way up the ranks of a local mob.”

For the last film this month Corey picked Cape Fear. It’s a remake and a tough watch since the plot reads “A convicted rapist, released from prison after serving a fourteen-year sentence, stalks the family of the lawyer who originally defended him.” Though the cast bodes well as it has Robert De Niro, Nick Nolte, Jessica Lange, and Juliette Lewis.