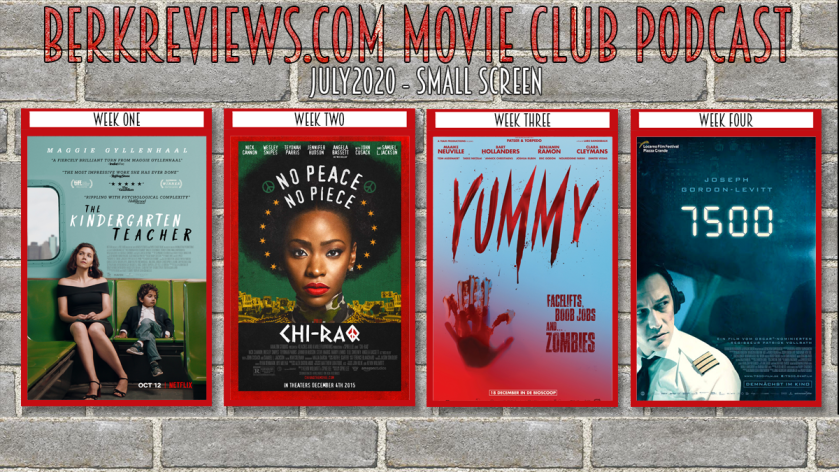 Fresh off quarantine and on the precipice of returning to it, Jonathan (@Berkreviews) and Corey (@coreyrstarr) return to the theme of Small Screen. That is to say, these films are all streaming originals or at least available on a streaming service. It’s a good way to check off some movies that slipped passed the two of them over the years or maybe even this year.

Corey had first pick for this theme and she selected the Maggie Gyllenhaal lead vehicle The Kindergarten Teacher (2018) which is streaming on Netflix. This is the American remake of an Israeli film written and directed by Nadav Lapid. The 2018 version of the film is directed by Sara Colangelo and stars Gyllenhaal, Gael García Bernal, and Ato Blankson-Wood. In the film, Gyllenhaal plays the titular kindergarten teacher who becomes obsessed with one of her students whom she believes is a child poetry prodigy.

Jonathan has been diving into Spike Lee’s filmography so decided to use the theme to watch Lee’s 2015 Amazon Prime original film Chi-raq. A modern-day adaptation of the ancient Greek play Lysistrata by Aristophanes, set against the backdrop of gang violence in Chicago, Illinois. The film stars Nick Cannon, Teyonah Parris, and Wesley Snipes.

Corey has supported Shudder for a while so she chose the film Yummy (2019). Written and directed by Lars Damoiseaux and stars Maaike Neuville, Bart Hollanders, and Benjamin Ramon in a film that has a tagline that states “Facelifts, boob jobs and zombies”. The synopsis doesn’t give much in the way of plot, but it seems to be a horror trope showcase.

Jonathan is a fan of Joseph Gordon-Levitt so the Amazon Prime original 7500 (2019) made sense to check out. Directed by Patrick Vollrath and starring Gordon-Levitt, Omid Memar, and Aylin Tezel. The film sounds intense with IMDb.com stating, “When terrorists try to seize control of a Berlin-Paris flight, a soft-spoken young American co-pilot struggles to save the lives of the passengers and crew while forging a surprising connection with one of the hijackers.”