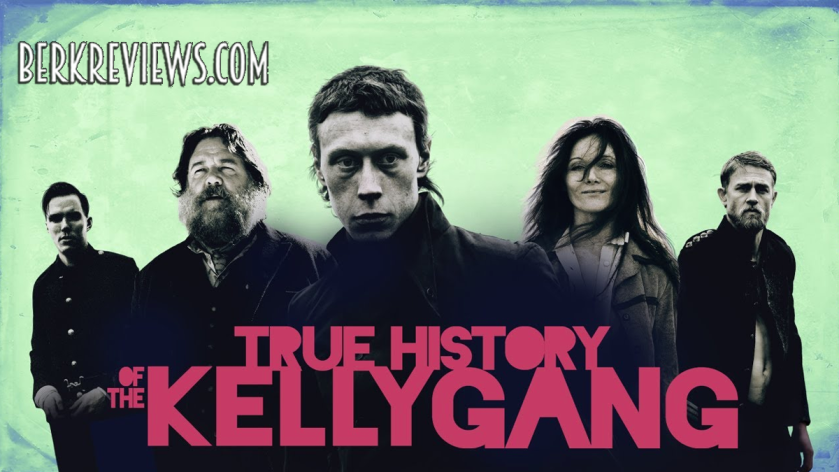 It’s not uncommon for a film to claim to be a true story, but the True History of the Kelly Gang (2019) contradicts its own name in the opening title. Immediately, the reality is set that this isn’t a true story at all, but a fantastic retelling of a real-life antihero (or criminal), depending on the perspective one takes. Director Justin Kurzel goes to great lengths to make this film feel like a fever dream at times, and writer Shaun Grant, who adapted the novel by Peter Carey, chose to frame the film as part of the letters Ned Kelly wrote,  making his explanation of the tale feel very much like Robin Hood.

The film begins with Ned Kelly (George MacKay) writing and narrating his childhood. Young Ned (Orlando Schwerdt) lives in a shack on a large stretch of barren land, where he witnesses his mother, Ellen (Essie Davis), fellating Sergeant O’Neil (Charlie Hunnam) to make enough money to keep them alive. His father tells him to walk away, but Ned seethes silently with anger at O’Neil, and what his father is allowing to happen. It’s not long after Ned’s father’s manhood is questioned that Ned becomes the proverbial man of the house. Schwerdt does a fine job in this role and is convincing enough in his performance to hint at a solid future.

Ned’s father is arrested for a crime Ned committed, and soon after dies in prison – leading Ellen to sell Ned to Harry Power (Russell Crowe). It’s here that the film really gets going, as Crowe has truly become the best of himself when playing the aging, out-of-shape guy who people often underestimate. Harry takes Ned under his wing, and at first, Ned is in heaven – but that’s only because he hasn’t seen the true character of the man that’s been set to raise him. It’s not that Harry is bad to Ned, but rather that Harry is just a criminal with his own set of morals which clash with Ned’s pretty quickly. Young Ned ends up being sent to prison, and that’s when the actors swap.

MacKay has proven a few times now that he is an up-and-coming megastar. His performance in 1917 is easily why that movie hits so powerfully on an emotional front, atop of the awe created by the cinematography – and his performance in this film is certainly a highlight. The charisma that pours from him on the screen makes it understandable why Ned Kelly is a folk hero. Of course, there is no way of knowing if the real-life man had any of the charms that MacKay does – but given the legends, it seems believable. One of the first scenes where we see is of MacKay as Ned, distorted in a pose that’s much more reminiscent of a horror film as anachronistic punk music blares. He’s bent backward with his head dangling close to the floor, apparently stretching as the next seen showcases him in a bare-knuckle brawl. It’s here that, if Ned is a Robin Hood figure, we meet his Prince John.

Constable Fitzpatrick (Nicholas Hoult) is in the audience of the fight and decides to befriend Ned. What would a new friend do? Well, take you to a brothel and introduce you to a world not known to Ned. It’s here Ned meets and instantly falls in love with Mary (Thomasin McKenzie), as they spend more time together than one would usually with a prostitute. Fitzpatrick soon reveals his ulterior motives, and the two slowly turn from friends to foes, and Ned transforms from innocent bystander to ruthless gang leader. The transition is intriguing and full of unique ways of showing it cinematically – including the legendary ending to Ned’s story, using strobes and flipped contrasts, which looked pretty awesome.

True History of the Kelly Gang will be on VOD this week and is definitely worth a rental. There is some compelling content found in stories based on folklore and history. A real man and his exploits tied to a question of perspective in a time when the poor feel the pressure from the rich seems appropriate. A great cast and interesting cinematic choices make this an entertaining watch on top of the compelling story. True History of the Kelly Gang earns the Not Quite Golden, Ponyboy rating.