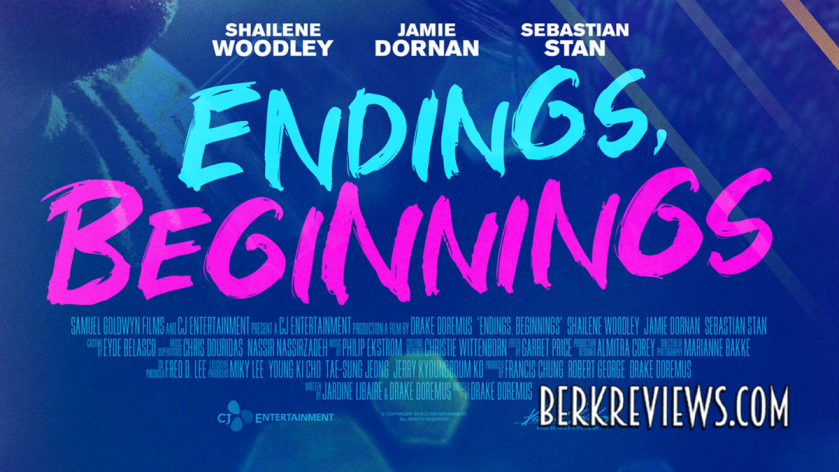 Endings, Beginnings (2019) is the new film written and directed by Drake Doremus and co-writer Jardine Libaire. Doremus’s other films, Like Crazy (2011) and Zoe (2018), have not entirely clicked with my tastes, and this film initially is the same. It’s something with the characters that Doremus crafts that I find hard to connect with. However, his movies always stay with me when they’re over, and that is what makes it hard to totally judge. I don’t often enjoy the viewing, but in reflecting on the film, I tend to warm to it a bit.

Daphne (Shailene Woodley) has quit her job, broken up with her boyfriend Adrian (Matthew Gray Gubler), and moved into her sister’s pool house. She takes this opportunity to reevaluate her life as she enters her thirties. Under the advice of some friends, she stops drinking and swears off men…that is, until she meets two new guys at a New Year’s Eve Party. Jack (Jamie Dornan) is the sensible choice, but Frank (Sebastian Stan) seems to be the more passionate option. The complication is that Frank and Jack are old friends, but both desire Daphne.

Woodley has continued to be an impressive screen presence. Her early work didn’t seem to imply the talent that she would become, but this movie is another great example of her talent. The film is heavy with close-ups, and full of moments where she has to showcase a wealth of emotion  – and a lesser actress may not hold up to the camera’s scrutiny. Here, every emotion she goes through works, because she appears to be able to feel those things.

Stan has a very charming screen presence and has proven his ability to play the asshole when needed. His character has both traits, and it’s easy to see why Daphne is drawn to Frank. His courting of her through text messages and a sad music playlist is sweet. The choice of font to show the text messages doesn’t really look great, but it does feel like it fits the characters and their melodramatic ways. Jack is a writer, and he clearly has more long term plans for Daphne than Frank – but unfortunately, Dornan isn’t as great on screen. Thus, it’s hard to root for Jack over Frank, and it’s clear why Daphne doesn’t seem to make the right choices.

That’s part of the problem with Doremus’s films for me. His characters continually make bad choices, and yet earn very little empathy from me to feel compelled to support them. I watch while aggravated pondering why these characters continually self-destruct or choose the wrong answer over and over again. I don’t dislike them, but I also don’t feel connected to them, leaving me torn about the movie as a whole.

Endings, Beginnings didn’t really work for me overall. I’m not really sure what Doremus is trying to say with this story and what the characters are going through. The lack of purpose makes this a kind of sad journey, as Daphne struggles to find the path she wants to walk, dwells in regret, and doesn’t seem to learn from her past at all. Then again, isn’t that what we do time and time again? Endings, Beginnings earns the Not a Total Waste of Time rating. It is available ON DIGITAL: April 17, 2020 and ON DEMAND: May 1, 2020.

Since I was a kid I've always viewed films as important. The main reason is that they are a window to the soul. A well written film allows us to see things we otherwise were not privy to. In light of the continued racial inequality I can no longer sit quietly hoping that others will see the flaws in this system and do something to change it. I've selected these films as I think they offer insight into a worldview that a white person would other wise not know. If you don't think there is a problem maybe you're not looking for it or at it. It is long past time for a change. #blacklivesmatter
Final product...taste test says I crushed it.
Chicken legs on the grill...it's what's for dinner.
I made #chaffle and a little bit of #siracha syrup. Really good and really easy.
Brand new #movieclub #podcast episode out now where we discuss #thehost directed by #bongjoonho . . . #ituned #Spotify #sticher #googlepodcast #anchorfm
Have you seen #stopmakingsense because it's pretty amazing! It's streaming on Prime right now and our most recent episode of #movieclub #podcasy for #mintinbox month is out and we are talking about it. . . . #itunes #spotify #stitcher #googlepodcast #anchorfm
Advertisements
%d bloggers like this: