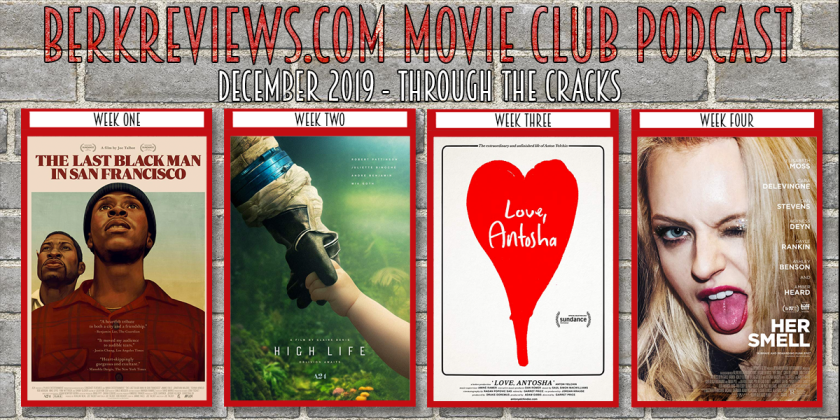 Every year it is inevitable that Jonathan (@berkreviews) and Corey (@coreyrstarr) miss some of the big or small releases and December is the best time to catch those that previously slipped through the cracks. That’s the Movie Club theme for December 2019: Through the Cracks. Jonathan and Corey each picked two films that were released officially in 2019 that they missed for one reason or another.

Corey had first pick and went with the reliable A24 films. The Last Black Man in San Francisco (2019) was released in June, but neither Corey nor Jonathan was able to see it while it was out. Directed by Joe Talbot and co-written by him and the lead Jimmie Fails, the movie has a few notable stars in a few smaller roles like Danny Glover, Finn Wittrock, and Mike Epps. The IMDb.com Plot summary reads “A young man searches for home in the changing city that seems to have left him behind.”

Jonathan picked High Life (2018) that a lot of people were talking about when it had its official release in April of this year. Directed by Claire Denis and starring Robert Pattinson, Juliette Binoche, André Benjamin, and Mia Goth is also another A24 release that neither saw in theaters. The plot synopsis reads “A father and his daughter struggle to survive in deep space where they live in isolation.”

For the third film of the Through the Cracks theme, Corey decided to likely make both she and Jonathan cry to the point of dehydration watching the documentary Love, Antosha (2019). The doc is about the “extraordinary life and career” of beloved actor Anton Yelchin. It is directed by Garret Price and features a large swath of celebrities.

Jonathan picked the new Alex Ross Perry film Her Smell (2018) that was officially released in May of 2019. It stars Elisabeth Moss, Cara Delevingne, Dan Stevens and is about “A self-destructive punk rocker struggles with sobriety while trying to recapture the creative inspiration that led her band to success.” The premise and the cast were enough to win the last spot of Through the Cracks for Jonathan’s pick.