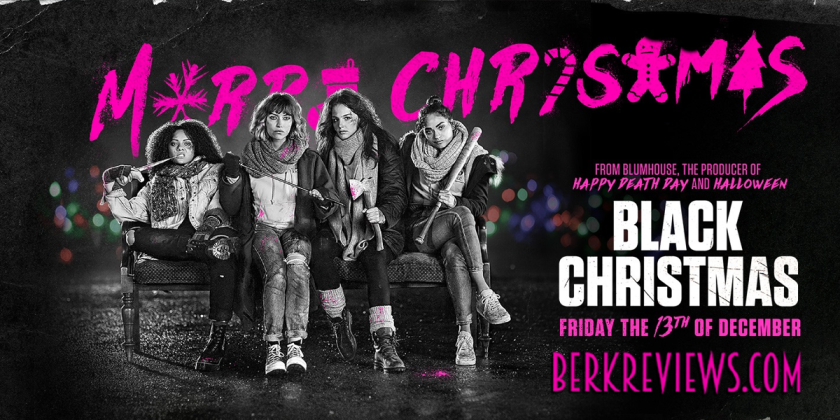 The trailers for Black Christmas (2019) are absolutely horrible. That awfulness is only compounded if you are a fan of the original 1974 film as this new one seems to not be a remake other than in name. Thus, I was surprised by the film that I sat down and watched as I appreciated the not so subtle commentaries that were being made and the performances by the principal cast.

It’s Christmas time and most of the students at Hawthorne College are getting ready to head home for winter break. A few girls at MKE sorority are staying and celebrating the season with their “orphan dinner” including Riley (Imogen Poots), Kris (Aleyse Shannon), Marty (Lily Donoghue), and Jesse (Brittany O’Grady). However, a few other sorority girls from campus appear to have gone missing and after singing a condemning song at the DKO talent show the group has begun receiving odd DMs from a fake account using the founder’s name threatening them.

As a horror film, this movie is fine. There aren’t a lot of scares, but there are a few moments where the tension mounts. At times, director and co-writer Sophia Takal and writer April Wolfe script seem to be unsure how to keep the movie going making a few of the scenes feel a little redundant and clunky. Though in the context of the story all the scenes work and don’t take you out of the film the amount of “oh, I think it’s over” moments in the third act get a little repetitive. Fortunately for Takal and Wolfe, the real point of the film is its anti-patriarch sentiments.

The trailers gave away many of the later moments in the film including a multitude of plot points that felt like they should have been “reveals” the audience would receive on the journey. However, the trailer doesn’t show the commentary being made in the film about fraternity lifestyle, victim shaming, the fragile male ego, and the general idea of the patriarchy. As a father with a 15-year-old daughter, I often consider myself a feminist. Though, in reality, I would say I’m an equalist; thus I found the messages in this film to be inspiring and really made me care about the characters. That is the most important thing I find horror films often failing to do. Sure, the kill scenes can be entertaining and innovative, you may cause me to shriek at pitches I didn’t know was possible, but if I don’t care about the people in danger then I probably don’t care about your movie. Here, I was invested with the plight of our characters and found their friendship believable and encouraging.

I expected to be miserable watching Black Christmas as the last few Blumhouse films in this vein have been extremely disappointing. The total opposite happened here and I ended up highly recommending it to anyone who’ll listen. If you were like me and unimpressed by the trailer I say give this shot. Of course, some people are going to be put off by the points being made and others may find the on-the-nose metaphors to be bad. They worked for me and Black Christmas earns the Not Quite Golden, Ponyboy rating.