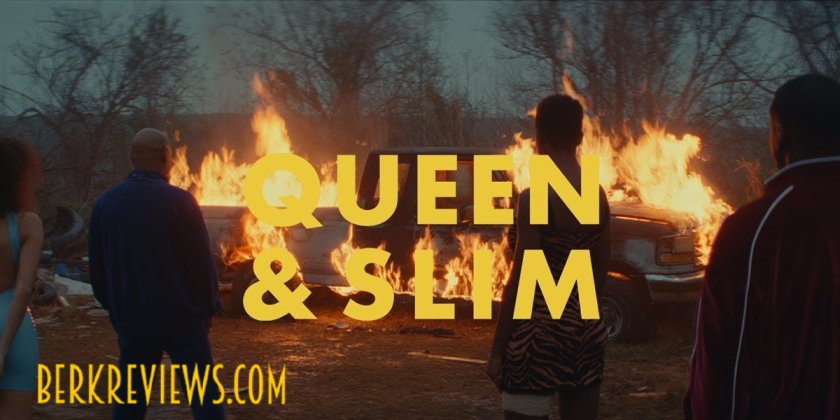 Director Melina Matsoukas’s feature film debut Queen & Slim (2019) demonstrates a filmmaker with a clear voice and style. There are a few choices that didn’t click well with me (or I don’t think quite worked), but overall, her patience with the story and the visual style are strong. Of course, it’s not solely Matsouka’s voice that makes this film work – but I subscribe to the auteur theory, and attribute much to Matsoukas.

Slim (Daniel Kaluuya) and Queen (Jodie Turner-Smith) are on their first date, and it isn’t going very well. There is some kind of connection between the two, but ultimately they seem to want different things. After being pulled over by Officer Reed, Queen has enough of the poor treatment of Slim, and things quickly spiral out of control. The two decide to run – attempting to escape their fate, if possible.

Kaluuya has been knocking it out of the park since Get Out (2017). He was terrific in Widows (2018), and his performance here is off-the-charts excellent. Kaluuya has this ability to deliver the tone of a scene in almost any instance. There is a lot of emotion in his eyes, and his body language easily conveys what we, the audience, should be thinking and feeling. Thus, he manages to elicit empathy from us as well.

This is the first time I remember seeing Turner-Smith, but she is a great partner to Kaluuya. The chemistry (and lack thereof) between the characters is essential to this film and the story. They barely know each other, and then decisions are made which completely alters their futures and pushes them together. I believed every moment between the couple and the progression of their journey together.

One area of the film that really demonstrates the style of Matsoukas is the various ways she chose to shoot the driving sequences. This is a road trip movie in many ways, and we spend a lot of time with the characters locked inside a car. It could be very boring visually – but instead, the variety of camera set-ups we get help to keep the visuals interesting and impactful to the various moments.

Queen & Slim deals with a hot topic issue and showcases multiple perspectives throughout the film. Subsequently, the film will likely rub some the wrong way, but it is through this confrontation with one’s beliefs that change can be made. It is a compelling film with a great score and brilliant performances, which still has a few moments that are a little rough or hard to interpret. Nonetheless, it was a very good debut, and Queen & Slim earns the Not Quite Golden, Ponyboy rating.