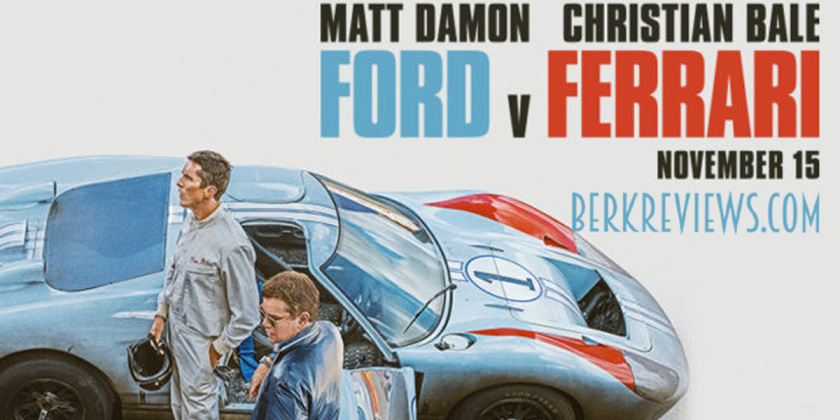 One of my great joys of films is encountering a story that I know nothing about, and being completely taken in by it. James Mangold’s new film Ford v Ferrari (2019) managed to do exactly that. I was only vaguely familiar with Carroll Shelby and his connection to Ford, but I found this film to be funny, heartfelt, and just outstanding overall.

Henry Ford II (Tracy Letts) is looking for a way to shake up the usual production at Ford, and Lee Iacocca (Jon Bernthal) suggests they get more involved with racing. Carroll Shelby (Matt Damon) is recruited to help build a car that can beat Ferrari at the 24 Hours of Le Mans. Shelby brings volatile driver Ken Miles (Christian Bale) with him, and the two set out to make history.

Here’s a hot take for you: Bale and Damon are amazingly talented actors who bring so much to the roles they take, that it is hard to ever dislike the movies they’re in – even if they’re bad. Put them both in a movie that is great and telling a story about friendships, loyalty, and humanity – and you’re in for one enjoyable time at the movies. I have been a fan of these two for years, but I really loved them working together in this capacity.

I love movies where we see someone who is good at something getting to do that very thing well. It is so encouraging to see someone doing the thing they are passionate about at a level of expertise that one should aspire to. Of course, that drive is also usually the cause of that person’s conflict, and that speaks to the human condition so much that it almost always works for me as a storytelling device. I’m not really a fan of racing, and my knowledge of cars stops at how to drive them – so, the premise of this film really shouldn’t work for me. However, I found every minute of the 2 hour and 32-minute runtime to work.

Ford v Ferrari is definitely a film I’d recommend to anyone. In fact, I think seeing it on the big screen is rewarding, as the visuals during the race sequences look pretty amazing. Bale and Damon should be in the discussion for the awards – but Letts, Jupe, and Bernthal all give outstanding performances. I also really loved the relationship between Miles and his wife, Mollie (Caitriona Balfe) – even though she doesn’t get nearly as much screen time. I thought her performance was very strong, and the relationship between the two gave some of my favorite moments in the film. Ford v Ferrari earns the Must See rating.

#movieclub #podcast is about #wildrose listen wherever you get your podcasts. . . . #stayathome #googleplay #itunes #Spotify #stitcher #anchorfm
#landscapephotography #sunrise
First official day back to work...but online. #rsvlts Rookie of the Year shirt on top and gym shorts on bottom...Coffee? CHECK
The last episode in our #phoenixrising month, an exploration of River Phoenix movies, comes with #iloveyoutodeath and #movieclub will be moving onto the #smallscreen movies next month. . . . #podcasting #itunes #googleplay #anchorfm #Spotify #sticher #podcast #movies #films #cinema #filmnerd
My wife and daughter decided we needed to do a photoshoot while practicing #socialdistancing and rocking my #ghostbusters #rsvlts shirt for the first time
Two reviews dropped today for movies that will be available on VOD Friday... #bananasplit and #vivarium . . . Full review at Berkreviews.com
Advertisements
%d bloggers like this: