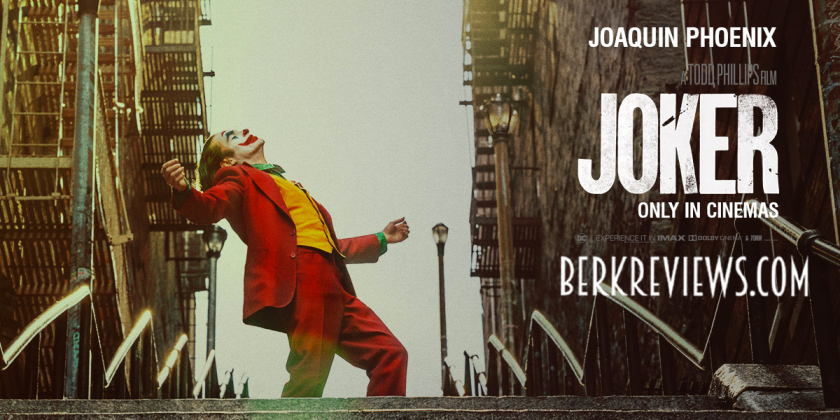 Joker (2019) may be the first film that I’ve ever been equally excited and apprehensive about seeing…ever. There are several factors that go into this tightrope walk of nervous anticipation, from my love of the character, to my Batman obsession, and to DC Films overall general quality. The craziest thing is that after finishing the movie…I was still standing on my tightrope, just as unsure about the film as I was when I had walked in.

Arthur Fleck (Joaquin Phoenix), who lives with his mother, Penny Fleck (Frances Conroy), suffers from a neurological disorder, works as a party clown, and has ambitions of becoming a stand-up comedian. Penny calls him “Happy” unironically – but nothing could be further from the truth. As life continues to beat him down, Arthur finds glimmers of hope that ultimately lead to violence – which in turn offers a darker joy that takes hold of him.

There are many things in this movie in which one can find joy, despite the film being extremely mean-spirited and ultimately falling into nihilism. Phoenix and Robert De Niro, who plays a late night talk show host named Murray Franklin, are both excellent. I have no complaints with the performances, but the level that Phoenix took his physical look was too extreme and dangerous in my opinion. Even the story of the film is engaging, and plays like a dark descent down into the basement of a madman’s mind – a theme that is visualized by several shots of stairs throughout the film. Subsequently, my complaints don’t lie with the film itself, as much as they do the choice to connect it to the Joker.

I don’t believe this film needed to be attached of the legendary Batman villain. In fact, I think the worst parts of this film are the perfunctory Batman-related pieces. I will keep this review spoiler-free, so many of my bigger complaints can’t be addressed right now – but I think I may write an extended piece truly delving into my personal issues with it. One is simply that it is set in Gotham City…but it is clearly New York. True, this is not an unusual comparison at all – but this Gotham feels like the real New York which resembles Martin Scoreses’s Taxi Driver quite a bit. It doesn’t hurt this comparison that De Niro is in this movie, but there are several aspects that definitely remind me of that ‘70s classic. Thus, Gotham feels forced, as the movie is clearly pulling from the real New York…so why not just let it be New York? Why not let Arthur turn into a more sadistic version of himself, without the alter ego that doesn’t really get that much screen time? The Joker that shows up in this film doesn’t feel like the movie truly grasps the character well enough. There are pieces of the Joker woven throughout this character’s DNA, but in many ways this feels like a “What if” or “Elseworld” comic (which I am often a big fan of). However, I don’t know that this one worked for me…yet, I still don’t think I disliked the film.

Joker is easily the most difficult film I’ve had to tackle this year when it comes to gauging my reaction. The most clear complaints I have are about some of the song choices – specifically the one chosen as he dances down the stairs in the full make-up that became a meme before the release of the film. I’m not against Phoenix “Joke-tutsi”, and I kind of look at it as a weird nod to the Adam West Batman, but the music during that dance just didn’t work at all. There is also a side story that wastes the very talented Zazie Beetz – which also feels like an afterthought in the story, as it really doesn’t do much at all for the character or the bigger picture.

It’s been two days since I watched Joker, and I still don’t know how I feel about it. I think it’s good, but I don’t think I really liked it. I’m a fan of noir and movies that end darkly, but there is usually something I walk away with that makes me feel okay. There was no optimism when this film ended, and it only left me more upset that it was attached to what I would argue is the best villain ever written. Joker currently earns a Decent Watch rating that could easily go higher or lower after a second viewing.