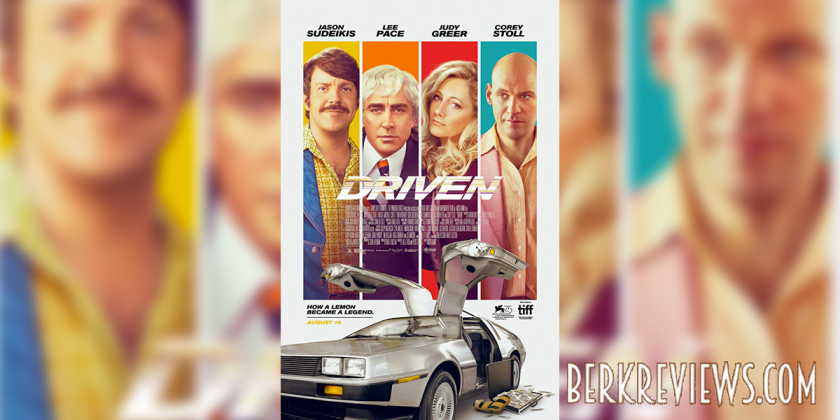 Any movie lover is familiar with the DeLorean, and it is probably in their list of top five time machines. I’ve loved that car since I was a kid, as a result of my affection for Back to the Future – but I knew almost nothing about the creation of the car. The new biopic Driven (2018), directed by Nick Hamm, showcases the relationship between Jim Hoffman (Jason Sudeikis), a pilot turned FBI informant, and John DeLorean (Lee Pace), who he moves in next door to.

The story weaves two timelines of the story together, though it is initially unclear of when the courtroom element occurs in relation to the other content. Hoffman walks with Special Agent Benedict Tisa (Corey Stoll) as he preps him for the upcoming trial. It cuts to a scene where Hoffman is landing a plane with his family, wife Ellen (Judy Greer) and their two kids, being detained by FBI including Special Agent Tisa), and uncovering a bunch of cocaine hidden in the wing. Thus, we are seeing what leads to Hoffman’s role as an informant.

The Hoffman family is moved into a new house, where it isn’t long before DeLorean shows up and the two start to become friends. It is right at the beginning of DeLorean’s attempt to create a car that will bear his namesake. DeLorean invites the Hoffmans to a party that is truly designed just to recruit investors.  The movie continues to show the ups and downs of the new company, the relationship between Jim and John, and Jim’s internal struggles with his lot in life. Overall, the story is compelling, and the movie is mostly engaging – though it did drag at times.

Sudeikis is an actor who I initially found a little bit obnoxious, and often more of a distraction in his roles. However, as he gets more experience and a wider berth of roles to play, he has become an actor who makes me want to see the movies he is in. I loved him in Colossal, Tumbledown, and We’re the Millers. There is something about his comedic style that just clicks with me. While trying to articulate exactly what it is that I like, it seems to be his ability to deliver biting lines of dialogue while smiling and making them feel almost like compliments, rather than the insults they often are.

Judy Greer is such a good actress, and unfortunately, it seems she often gets little to do in many of the films I’ve seen her in. That’s not entirely true here, but she is still underutilized. Fortunately for us and the movie, she gives a strong performance that makes the relationship between Jim and Ellen more important than the time it is given would imply. There are some strong scenes between the two that really help put into perspective Jim’s mental state.

I know nothing about the real-life DeLorean in order to compare Pace’s performance to the man. He is very stoic and sometimes hard to read, and at other moments he is unbelievably intimidating when the facade cracks because something doesn’t go his way. There is a charm to the character, though it never seemed totally sincere, as though he were pretending to be the person he thought everyone wanted him to be in order to achieve his dreams.

Driven was a revealing look at this very specific moment in the life of John DeLorean. It isn’t a film that feels essential, nor is the story one that will likely change anything in a major way. I did find myself pulled away from the film a few times, and there was a moment that I thought would clearly be the end of the film that turned out to only be the middle. DRIVEN is in theaters and on digital/demand on August 16, 2019. Still, I mostly enjoyed Driven earning it the Decent Watch rating.