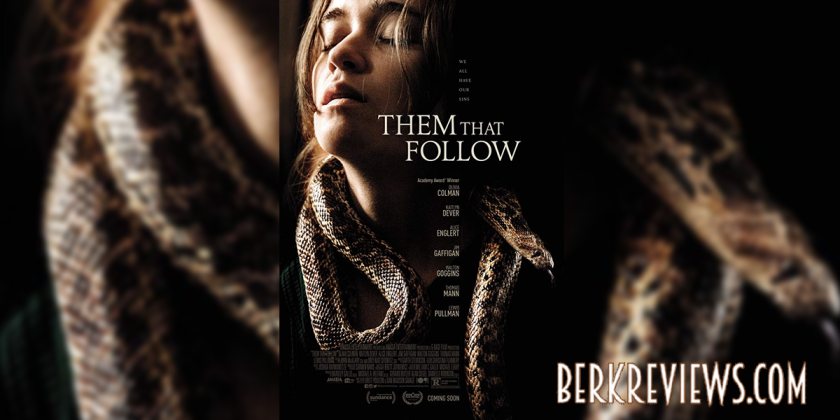 Britt Poulton and Dan Madison’s film Them That Follow (2019) made my skin crawl multiple times…and not just because of the snake handling, although admittedly that was a major part of it. There are two scenes in the movie where characters are holding rattlesnakes, and both sent my anxiety levels through the roof. While much of the film is quiet in contemplation about the themes being addressed, the audience is afforded the opportunity to think and enjoy the performances of this solid cast.

Snakes made my skin crawl in Them That Follow

Mara (Alice Englert) lives with her father, Pastor Lemuel (Walton Goggins), who is also the head of a small church and devout community. Mara has been asked to wed Garret (Lewis Pullman) – whom her father approves – but she is really in love with Augie (Thomas Mann), who has turned his back on the church. Mara has a secret that sets her at odds with herself, and those she holds dearest.

Englert, Goggins, Mann, and Pullman are just the beginning of this great cast. Olivia Coleman, Kaitlyn Dever, and Jim Gaffigan round out the rest of the big roles. While I loved the performances all around, I’m always excited to see Mann doing good work. I am a fan of Me and Earl and the Dying Girl (2015), but I really despised Some Freaks (2016). He has since done a few other movies where I think he’s solid, but I thought he was quite good here.

Coleman is such a talent (as is Goggins) that it is easy to overlook how much they put into their performances. They are always doing good work, and while both are capable of leading a film, they often seem at home in smaller, character-driven parts. That is exactly how they are used here, and both do some outstanding things with the material they are given. Coleman plays Augie’s mother, Hope, who states that she hadn’t found herself until they found this church and community. Augie turning his back on their faith has been trying and becomes a central plot point later in the film.

Englert is the undeniable lead, as it is Mara’s secret and the inner turmoil that drives much of the film’s story. Her character also ties in most of the themes that deal with faith, and self-fulfilling prophecy leads the community to put themselves in harm’s way. Their church uses rattlesnakes to prove their faith to God. Thus, there is nothing to fear if you are pure and faithful, ultimately meaning that if you are bitten you have done something wrong or waiver in your beliefs. It is hard to dispute such beliefs, and the movie deals with it in interesting ways.

I really appreciate the writing and exposition of this film. There is much that Poulton and Madison leave for the audience to figure out or piece together. The moments of backstory that are given are through nuance rather than clunky expositional dialogue, making for an overall more interactive viewing experience. If you watch this film passively, you will likely miss out on what happened to Mara’s mother, the views the rest of the community has about the church, what each character’s “demons” are, and so on. That’s not even getting into the treatment of women by the male characters in this film, and the implications of such things.

Them That Follow is a very good film that rewards those who attentively watch it. There is enough here to build suspense on a strictly superficial level – especially if snakes freak you out – but there is a lot going on underneath the surface. Them That Follow earns the Not Quite Golden, Ponyboy rating.