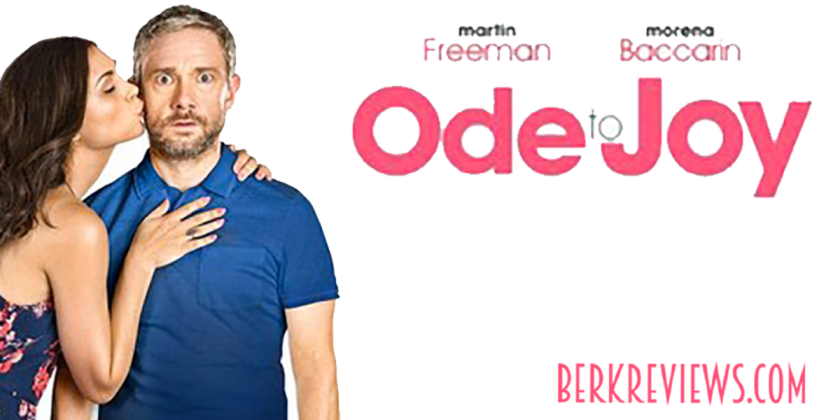 Ode to Joy (2019) is a great romantic comedy that introduced me to a disease I’d never heard of before. Charlie (Martin Freeman) suffers from cataplexy, a symptom of narcolepsy that causes sudden bouts of paralysis whenever he experiences strong emotions – and for him, it is specifically joy. This illness is demonstrated right at the beginning of the film, as Charlie and his brother Cooper (Jake Lacy) are best men at their sister Liza’s (Shannon Woodward) wedding. As Charlie swells with joy he starts to pass out, but Cooper is there to help him back. However, the joy of Liza’s happiness is too much to bear and Charlie collapses.

Ode to Joy is a rom-com that works for me

Thus, we are introduced to Charlie’s life, where he is unable to experience joy. In many ways, the premise sets up that this will be a sad film – but it is a straight-up comedy. Freeman does a tremendous job with this odd character. Charlie’s default emotion (by necessity), is essentially depressed. This is only emphasized by his routine, and the one thing that seems to bring him joy safely: riding the carousel.

The romantic part of the film comes into play when Francesca (Morena Baccarin) is dumped in Charlie’s library. He intervenes and helps cool Francesca’s temper, which makes her take a liking to him. Charlie is definitely interested, but afraid to experience too much joy, since it could lead to a devastating accident. The film puts this conflict in the center of the storytelling, and Charlie pushes Cooper to date her instead.

The performances in the film are all outstanding. The mostly small cast is full of great chemistry. Melissa Rauch plays Bethany and is the absolute funniest part of the movie. Bethany is extremely mild-mannered and soft-spoken. It speaks to Rauch’s comedic flexibility if you’ve ever seen Big Bang Theory or The Bronze (2015). She is able to completely immerse into the characters she plays, and subsequently deliver some great comedy. The best moment in this film comes from her when she gives a cello performance. I laughed out loud for several minutes, both during and after this scene.

If you’re a fan of romantic comedies – which I myself have declared and proven time and time again – then you’ll definitely want to check out Ode to Joy. I’m not sure how common of illness cataplexy is, and I don’t believe this film makes fun of it as much as it uses it for the plot – but it also made me aware of something I knew nothing about. Ode to Joy earns the Must See rating.