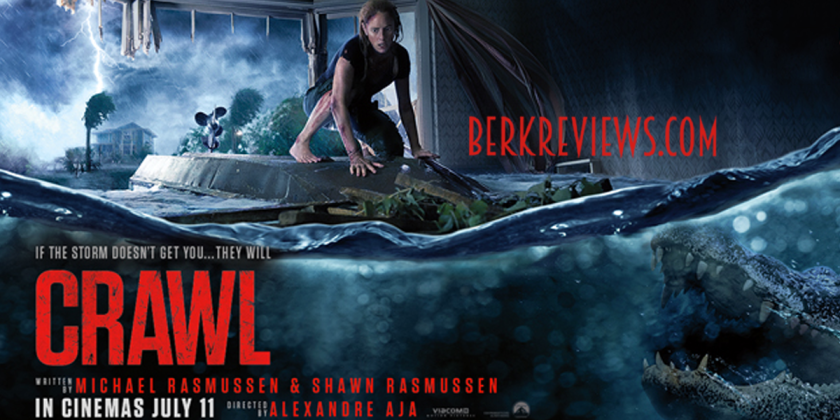 Crawl (2019) is an example of a movie that knows what it is, and it lives within that world without an apology. It’s a campy horror film in which director Alexandre Aja plus writers Michael Rasmussen and Shawn Rasmussen use the setting and premise perfectly. Having lived in Florida my whole life – and I’ve survived at least three major hurricanes in that time – this movie hit a lot of my anxieties hard, and still managed to keep it entertaining despite that.

Haley (Kaya Scodelario) is urged by a phone call from her sister Beth (Morfydd Clark) to check on their father (Barry Pepper). What makes this trip home from college a little more dangerous than usual is the category five hurricane that’s crashing into the state. Haley finds her father unconscious in an area under the house where they are both trapped by alligators. They must escape the gators and the storm in order to survive.

Scodelario and Pepper have some strong father/daughter chemistry in this film, though some of the dialogue is a little clunky and often cheesy. Still, I think both these actors do a great job of making this film feel tense. The characters are fleshed out enough to make you care about their well being, and that is very much at stake, as odds are increasingly stacking against them. Aja makes this ticking clock of claustrophobia work in the film’s favor as the audience gets few moments of relief from the intense situations in which the characters find themselves.

While the film is intense and full of some solid jump scares, there are moments of pure campy goodness that made for some solid, eye-roll-inducing laughter. Most of the movie is just Haley and her father, but the few other characters that get introduced are simply fodder for gator kills. This isn’t a complaint, though, as one of the elements of ‘80s horror I enjoy are the creative kills, and this film definitely delivers on this front. Even the set-up of the film’s premise is well-executed, as I knew they were going to be trapped by gators – yet when it all finally happens I had jumped, grabbed the armrests, and laughed at my own reactions.

Crawl manages to deliver on its premise, and it really makes for an intense summer movie-going experience. While I skipped a few of the summer horror films, Crawl is by far the best that I’ve seen. This would be an easy film to rewatch if it were on basic cable, which is where it will likely find a bigger audience. Crawl earns the Decent Watch rating.