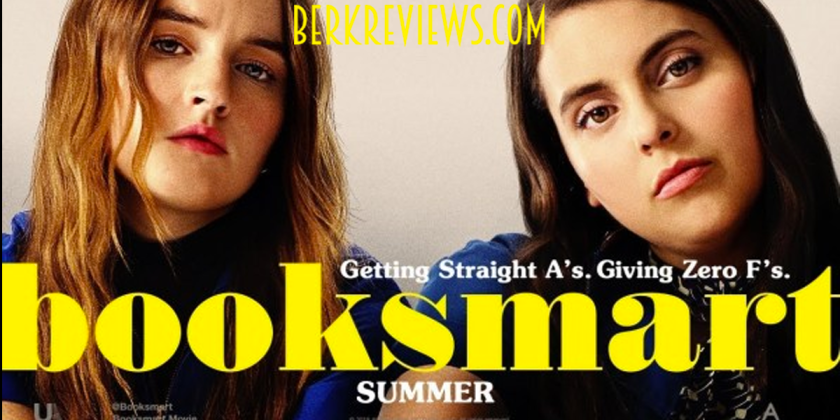 Olivia Wilde just gave the world the next iconic coming-of-age high school movie in her directorial debut with Booksmart (2019). Wilde delivers a heartfelt story full of great comedic moments, strong visual sequences, and tremendous performances from the cast. In some ways, the film mirrors its characters, as it had critical success but has even managed to push its way into theaters during the summer releases alongside Aladdin (2019), proving that it is both smart and fun enough for the casual summer moviegoer popcorn fare.

The opening to the film sets the tone for both it and Molly (Beanie Feldstein), as the camera looks slightly up at her back as she sits on the floor listening to a guided meditation (which is voiced by Maya Rudolph) that ultimately says “you work harder than everyone…”, ending with “F&$* those losers.” Molly is the Class (or “Ass” if you believe the sign) President, and it is the last day of senior year with graduation coming tomorrow. Molly and Amy (Kaitlyn Dever), her best friend, have both been focused for all four years to make sure their future plans are in perfect order; they have succeeded.

Booksmart gives the audience much to love about it, but the element that stands out the most is how smart the script truly is. Four people share writing credits (Susanna Fogel, Emily Halpern, Sarah Haskins, and Katie Silberman), which isn’t always a good sign when going into a film – but in this case, it was definitely the right combination. If you’ve seen any movie about high schoolers and coming of age, you will expect to see specific archetypes: the slut, the nerd, the jock, the cool guy, the stoner, the homosexual (this particular one will have several sub archetypes, often specific to the time period of the film’s release), the weirdo, and so on. You’ll find that this film offers many of those early on, as if a checklist should be issued at the door so you can mark them off as you see them. However, it’s what the film does with these archetypes over the course of the 1 hr. and 42-minute runtime that is so impressive. Not that it breaks new ground, but that it treats each character as a person who clearly has their own goals and desires that don’t always mesh with the views our two leads initially provide in giving us. In other words, it is a strong representation of reality, presented in a very honest and refreshing way which demonstrates these people aren’t here just to be the butt of jokes, but rather to craft relatable moments that we can’t help but empathize with – and, of course, laugh at.

The most important part of the realism the film offers is found in the performances by Feldstein and Dever. Their chemistry is off the charts, and their friendship seems completely real and genuine, as though they had truly lived the lives we are learning about. Feldstein had already won me over in Lady Bird (2017), but she gives an even more impressive performance now that the film rests on her shoulders. She truly can do it all, as her comedic timing is strong, her non-verbal acting is impeccable, and her charm breaks through the screen and demands that you pay attention to what she is doing. Dever isn’t overshadowed by Feldstein though, which speaks to her own caliber of talent. She is the more awkward and passive of the two characters, but Amy’s arc is different than Molly’s, so her smaller performance makes perfect sense for the character. That’s not to imply she doesn’t get some incredible moments, because some of the later parts of the film really belong to Amy.

There are a number of familiar beats in this movie. The most obvious of comparisons is the film Superbad (2007), which catapulted Jonah Hill and Michael Cera to stardom. Both films feature two best friends at the end of high school, and looking to the next step of their lives. Again, both films feature characters who realize they have “unfinished” business with the previous phase that they feel they must complete as a literal rite of passage before moving on to the next phase. This attempt at achieving this goal tests the limits of what was thought of as an unbreakable bond between friends, and eventually, truths are revealed, proving it wasn’t the rest of the school they’d only pretended to know, but themselves as well.  While the two films do share multiple plot elements and while I am indeed a fan of Superbad, I do believe Booksmart is overall a better movie, with much more ambitious filmmaking elements.

Two scenes, in particular, stand out from Booksmart, although both can be clearly pulled from other recent movies, as well as others from the past. There is a scene where Amy and Molly accidentally ingest drugs and there is the “tripping out” sequence. While this type of scene has been done in many movies, I found myself thinking about both 21 Jump Street (2012) and 22 Jump Street (2014), and their similar sequences while watching Booksmart. It’s to be expected that a scene like this would occur in a movie about high school kids trying to make it to a party, and there are several similarities to 22 Jump Streets scene in particular. Fortunately, Booksmart has it’s own take and the scene, which is hilarious and manages to still feel original.

The other scene is a fantasy musical number where two characters break away from the reality of the film and perform. This too has been done in tons of films, but most recently appeared in the Shape of Water (2017). I absolutely love this inclusion of a musical performance in Booksmart, and found myself giddily golf-clapping during the beginning, because I was excited to see how Wilde would do this. I was not disappointed, and it adds yet another impressive layer to this brilliant movie.

There is probably no point in building up to my rating of Booksmart as my praise surely gave it away: Must See. It is one of my favorite films of the year…and, to be honest, that’s not surprising. I’ve often stated how coming-of-age films really click for me, and that movies about high school often hit very close to home, as that is where I spend a huge chunk of my life. Still, it isn’t my biases that make Booksmart so great – it is everything the movie does and offers. Go see this while it is in theaters!!!