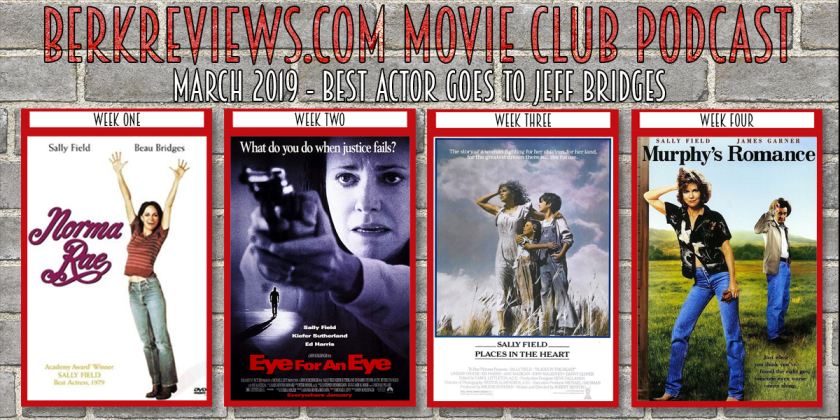 Last month, Corey (@coreyrstarr) and Jonathan (@berkreviews) decided to watch movies featuring Jeff Bridges, an actor who they love but had major gaps in their viewing history. To follow that up, April’s theme is Best Actress goes to Sally Field! She is a tremendous actress, but both Corey and Jonathan are missing some of her most iconic films.

Each episode features an in-depth review of the movie for the week initially spoiler free and then diving in completely after a spoiler warning. Before getting into the review Jonathan and Corey discuss what other movies they’ve seen since the last episode as well as anything else they feel like discussing. To help them decide which of the many films to watch each month they started creating themes for them all.

Sally Field won her first Oscar in 1980 after her performance in Norma Rae (1979). The film was directed by Martin Ritt and stars Sally Field, Beau Bridges, and Ron Leibman. Like all the movies in this months theme, neither Corey nor Jonathan saw this film prior to the episode. The film focuses on Norma Rae, who is a single mother, as she fights for a union to be established for the textile factory in which her family all works.

Week 2 has Corey selected and she went with the 1996 film, Eye for an Eye. Directed by John Schlesinger, it stars Sally Field, Kiefer Sutherland, and Ed Harris. This film sounds like it is going to be a bit heavy and likely melodramatic. IMDb.com has the plot summary as “When the courts fail to keep behind bars the man who raped and murdered her daughter, a woman seeks her own form of justice.”

Week 3 – Places in the Heart

Five years after winning her first Oscar, Sally Field would win her second with Places in the Heart (1984). Alongside Sally Field stars Lindsay Crouse and Ed Harris in this film directed by Robert Benton. The synopsis of the film reads “In central Texas in the 1930s, a widow, with two small children, tries to run her small 40-acre farm with the help of two disparate people.”

The final episode of the month features Murphy’s Romance (1985). The film is directed by Martin Ritt and stars Sally Field, James Garner, Brian Kerwin, and Corey Haim. The film is a rom-com and IMDb.com states that “Emma is a divorced woman with a teen-aged son who moves into a small town and tries to make a go of a horse ranch. Murphy is the widowed town druggist who steers business her way. “