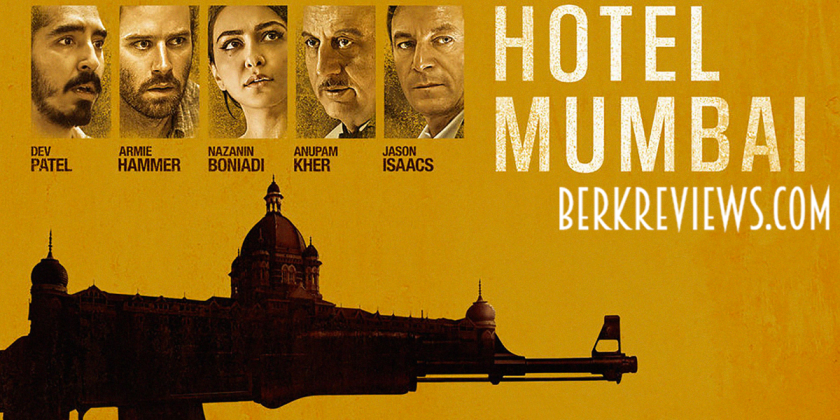 Anthony Maras’s first feature film, Hotel Mumbai (2018), is an ambitious debut telling a true story that is as horrifying as it is harrowing. Set in 2008, the film recreates a series of terrorist attacks in Mumbai which leads to and culminates within the Taj Hotel. The staff at the hotel, living up to the motto of “Guest is God”, does everything they can to ensure the safety of those they can help, as the terrorists gun down anyone they see.

Most of the characters don’t get developed much, but Arjun (Dev Patel) definitely becomes the main character in the movie. The first time Arjun is on camera, he is meticulously tieing his turban while getting ready for work. He picks up his young daughter and takes her to his wife, who is also working. Before leaving, he kisses her pregnant belly, and if that doesn’t make Arjun’s stakes in the film mean something to you, you’ve got to be heartless. He arrives late to his job at the Taj Hotel, and is nearly sent home when his uniform isn’t quite right.

It is at this moment Oberoi (Anupam Kher), the head chef of the Taj Hotel, gets the opportunity to win over the audience. Initially, Oberoi seems uncaring and all about business, but he takes pity on Arjun, and loans him a pair of shoes. Oberoi is given several moments to prove himself a good man, and while we know little of both men outside of their behaviors, it is enough to make you care about their well-being.

This is true for most of the characters that get screen time, such as Zahra (Nazanin Boniadi), David (Armie Hammer), Sally (Tilda Cobham-Hervey), and Vasili (Jason Isaacs). The characters can easily be placed into archetypes, but the situation they find themselves in earns them instant sympathy.  This is largely due to the fact that the movie makes the audience feel as if they are right there in these situations alongside these characters..

The terrorist attacks begin mostly off camera, as we see two terrorists with assault rifles and grenades walk out of a train station bathroom. We hear the gunfire, but we are saved any of the visible violence. However, this doesn’t stay the case, and the first on-screen killing is so shocking that I – and most of my audience – gasped. It’s in that moment when Bree (Natasha Liu Bordizzo) and her boyfriend Eddie (Angus McLaren) witness the terrorist actions that the intensity is ratcheted up. From this point on, the audience and the characters are trapped in a nightmare that brought out all kinds of emotions from me while watching. It was easily one of the most harrowing filmgoing experiences I can recall.

It is always a big risk of making a movie based on such a tragic real story. However, it seems that the cast, writers, and director all wanted to make this tasteful and pay tribute to the individuals who did everything they could to save as many lives as possible during this horrible incident. I have no recollection of the events depicted in this film, and that made me feel immense guilt in not being more aware of what the rest of the world was going through. Hotel Mumbai earns the Must See rating, with the warning that it is an intense experience.