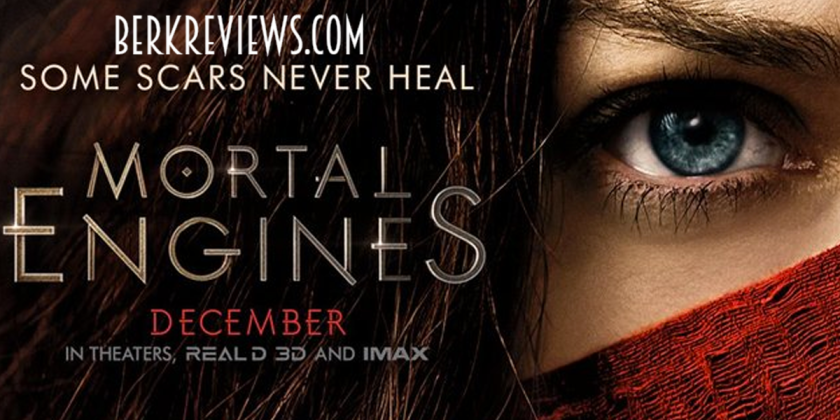 Mortal Engines is yet another post-apocalyptic young adult novel to be adapted for the big screen. I’d gone into this film with almost no knowledge of the story, and even fewer expectations. This seems to have helped, as the film was mildly entertaining. I enjoyed a couple of the performances, and massive amounts of CG looked primarily fine to me. With that being said, there isn’t much substance here. The massive world feels mostly unexplored, and the film features a power-hungry villain with no other clear motivation – which is getting a bit bland.

The world has been divided into cities on wheels that devour smaller cities, and the Anti-traction League, who live behind a giant wall in more traditional villages. London, one of the largest mobile cities, has crossed the land bridge in an effort to devour smaller cities for their resources, giving Hester Shaw (Hera Hilmar) her chance at revenge. Thaddeus Valentine (Hugo Weaving) lives on London and is working to develop a new energy resource, but Hester seeks to right a wrong from long ago by killing him. A young historian, Tom Natsworthy (Robert Sheehan), intervenes and is shown Valentine’s true colors. Now, stranded together in the outlands, Tom and Hester must either form a bond to survive, or go their separate ways.

Hugo Weaving is always a welcome presence in a movie. He brings a sense of gravitas to any role he takes, no matter how silly the surrounding story may end up being. His character starts off very promising as an antagonist to Hester who doesn’t initially seem deserving of such a title. However, by the third act, the character’s motivations become hazy and generic, leaving a bitter taste on the back of your tongue. It’s disappointing, as Weaving’s performance makes Valentine charming and extremely likable, with just a hint of distrust. He seems almost too kind to Tom – who has been blatantly stated to be of a lower class – which makes you question Valentine’s motives.

Tom is really the character that won me over, though. I’m not sure if it was Sheehan’s performance, or just the passion the character seems to have for things that I connected with the most. Either way, I wanted Tom to rise up from the haters and overcome. Yet, his character – especially with the overly predictable story beats – doesn’t feel original at all. However, neither does Hester.

Hester is hell-bent on revenge, and trusts no one. She’s angry at the loss of her mother at the hands of Valentine – this isn’t a spoiler, as it was in the trailer and also happens early in the film via flashback – and has been living a tough life on the run ever since. The story really suffers from cliché at the connection between Tom and Hester. Nothing happens that truly makes sense of the arc we see with Hester. It falls into the usual teen drama and romance, with no real reason to accept it as truth (which something I felt Bumblebee handled much better).

This movie also suffers from too many characters and not enough development of them. While Tom and Hester are trying to survive the outlands, Katherine Valentine (Leila George) and Bevis Pod (Ronan Raftery) are trying to find out what Katherine’s father is up to. Director Christian Rivers has a hard time making these two characters receive adequate time to meaningfully show their motivations. Why is Katherine such a better person than her father? Who was her mother? Why does Katherine not look down on the working class like so many of her peers? There is not an explanation that can be clearly inferred, and none is given – which is odd, considering the early amount of exposition dumping done. Still, Katherine is likable enough that you believe her intentions, but that doesn’t mean they make an ounce of sense with the world we’re seeing.

The film definitely takes some jabs at London’s history of taking over Eastern countries. Citizens of the mobile city cheer during the initially…and only…chase sequence, where a small mining city is devoured by the much larger one. Later, when Valentine’s plans are announced, it is not met with fear or shock – but absolute glee. There are definitely some analogies that can be inferred here about blind patriotism, xenophobia, and the old history teacher motto of “those who forget the past are doomed to repeat it.”

Mortal Engines isn’t a great film, but it’s not a horrible one, either. It’s just another run-of-the-mill, big budget, special effects-reliant young adult adaptation. If you’re a fan of Hunger Games, Divergent, Diary of a Wimpy Kid…well, maybe not that one…then you’ll probably find something for you in this film. I didn’t mind it, and liked it more than I didn’t despite a few eye-rolling moments and a character that I swear Hester called Shrek. Mortal Engines earns the Decent Watch rating.