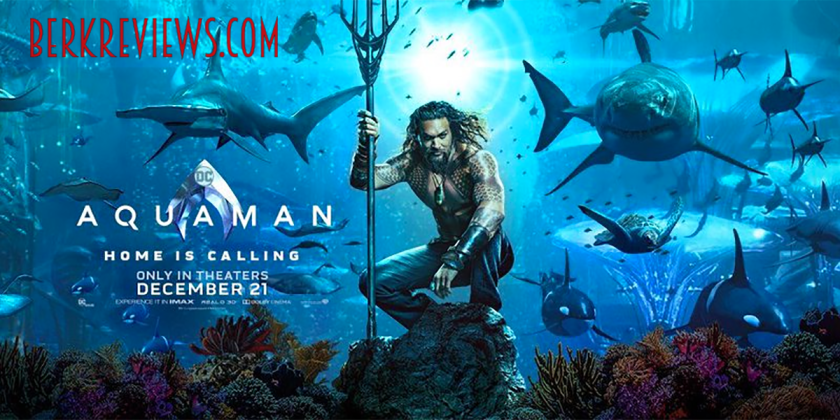 It’s no secret that I like comic book movies, and that Batman is my favorite character overall. I was a little kind to Batman V Superman on my initial viewing, but have gradually soured on the DC films with the exception of Wonder Woman – although I have major issues with the third act of that film. Unlike many others, I was not impressed by the trailers for Aquaman (2018) – especially the look of the CG – and the film didn’t fail to live up to my expectations. The film is fun with several good moments, but overall the film felt bloated, suffering from soap opera-esque visuals and story.

Arthur Curry (Jason Momoa), who has become known as Aquaman, must claim his birthright, the throne of Atlantis, in order to prevent a war between the land and the sea. His half-brother, King Orm (Patrick Wilson), is looking to unite the various nations of Atlantis in order to bring this war to the land, but Mera (Amber Heard) and Vulko (Willem Dafoe) have conspired to convince Arthur to embrace his birthright. However, King Orm has enlisted the help of a pirate known as Manta (Yahya Abdul-Mateen II), who has his own beef with the Aquaman.

Director James Wan and writers Will Beall and David Leslie Johnson-McGoldrick went too far back for a character who had already been introduced in another film. The movie opens with Arthur’s father, Tom (Temuera Morrison), rescuing an injured Atlanna (Nicole Kidman), showing how they fall in love. They have Arthur, and Atlanna realizes she has to return to Atlantis in order to protect them both. These scenes feature an awesome action sequence where CG Nicole Kidman demonstrates her CG martial art skills. However, it also features some melodrama and soap opera lighting that makes the de-aging done to both the actors look very fake. Choosing to start so far back before the character was even born makes little sense, and adds a bit to the runtime. This continues throughout the film in the form of flashbacks as we see Arthur training with de-aged Willem Dafoe.

Luckily, Momoa has tons of charisma and makes the character fun. Despite this, there are a few moments of forced drama and romance that don’t work as well. Fortunately, Wan takes the action sequences in fun directions that make those moments memorable and engaging. When the movie is having fun so is the audience, but there are times that feel absolutely out of place or jarring. For example, multiple characters in the film dub themselves their names, and it feels so cheesy when these moments happen. Black Manta especially feels too big from the moment he shows up on screen.

In the end, Aquaman is one of the better DCEU movies, but still nowhere near the quality that the other guys are producing. Momoa does his part well and makes Aquaman likable. Wan’s aesthetic choices don’t work for me, and the idea of so many scenes being underwater doesn’t help with some of the cheesiness. In the end, Aquaman earns the Decent Watch rating.