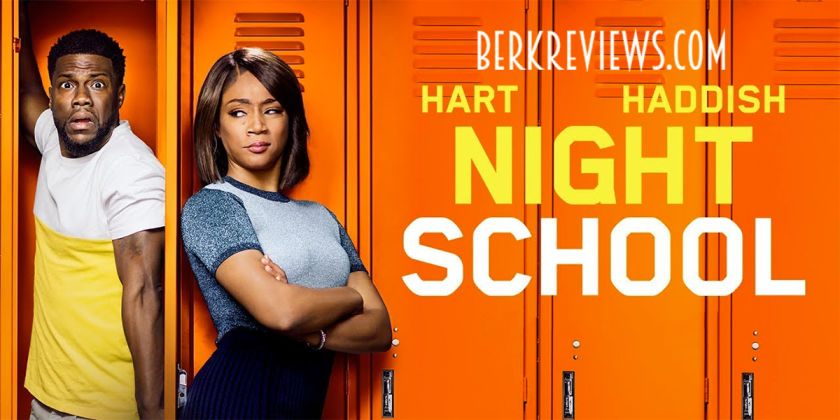 Kevin Hart comedies don’t jump out at me as something I generally want to see. To be fair, I’ve still skipped many of his more successful ones, with the exception of last year’s Jumanji: Welcome to the Jungle. However, the inclusion of Tiffany Haddish – who won me over with Girl Trip (2017) – did a little to nudge me into going to see Night School (2018). The trailers, on the other hand, made me dread the outing to the cinema…but it ended up working in the movie’s favor, as I was pleasantly surprised.

Night School appealed to me more than expected

Teddy Walker (Hart) loses his job after a freak accident shuts down the BBQ store he was set to take over and run in the coming months. In desperation to keep the love of his life and the image Teddy had constructed of who he was to her, he realizes that he must earn his GED. His teacher, Carrie (Haddish), tries to help the seemingly hopeless Teddy finish what he couldn’t all those years before.

The comedy in director Malcolm D. Lee’s film is definitely not of the highest order. Some of the slapstick elements that come to life are predictable, but they still managed to get a few chuckles out of the audience at my AMC Dine-In theater. The real laughs, however, came from many of the ancillary characters. Romany Malco, Rob Riggle, Mary Lynn Rajskub, Al Madrigal, Anne Winters, and Fat Joe comprise the rest of the students in the class taught by Haddish. Their grown-up versions of the Breakfast Club make for some of the funnier moments in the movie, the best of which is probably the heist sequence when they are trying to steal the answers to the practice test. Mayhem ensues, of course, and each of the archetypes gets a moment to shine with Riggle and Malco ending the sequence in a grotesque, but funny, moment.

Of course, there has to be a crazed authority figure who takes shape as Stewart (played by Taran Killam), the school’s principal and former classmate of Teddy’s. Killam has some great comedic work, including his random use of the “black voice” which he constantly gets called out on only to comedically respond with “I don’t hear color.”  Hart, Haddish, and Killam get some very witty dialogue exchanges which resulted in a number of quick laughs.

The story of the film, while often stretched out to near-ridiculous proportions, worked for me, though (it’s possible that my teaching career had a lot to do with this).  Furthermore, Teddy suffers from an undiagnosed learning disability – a problem that has plagued many students over the years, often resulting in them lashing out rather than seeking help for something they don’t understand. The fear of being made fun of or being told they’re dumb often leads to them dropping out of school. Haddish’s character is supposed to be that one-of-a-kind-teacher who cares so much for her students that she’ll go that extra mile to help them. While not entirely convincing in this film, I know many people like this, and strive to be that kind of teacher myself. Thus, I wasn’t the least bit surprised that this comedy still managed to choke me up a few times with these tender moments that seemed to praise the hard working, underpaid educators.

When the credits rolled after the last joke, I was smiling. Night School won me over, and I had a good time during the movie. Even the more eye rolling jokes actually managed to work for me and the audience I was with. Despite having a slightly overstuffed plot – Teddy’s trying to keep his girl, find a job, get his GED, fix past relationships, and mature – the film did have a bit of heart. The message and the humor worked enough for me earning the film a Decent Watch rating.