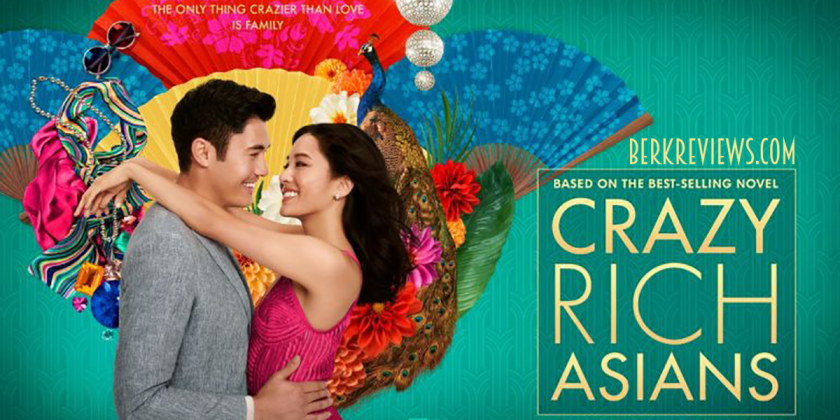 The buzz on Crazy Rich Asians has been very high, and I’ve not been able to see it. After ditching my old movie subscription service and getting put on a new list, I finally had my chance. For the most part, the film lived up to the hype…but I did think it was a little long, and there was one storyline that felt underdeveloped and subsequently forced into the film. However, the cast was extremely charming, and the laughs that were there – which were less than I had been expecting – were solid.

Rachel Chu (Constance Wu) is a game theory professor at NYU, and is in a great year-long relationship with Nick Young (Henry Golding), but she still hasn’t met his family. Nick tells her he wants her to come to Singapore with him for his friend’s wedding, and that’s when she finds out Nick’s big secret: he’s rich! Nick is beyond rich, as he is the heir to a massive business empire whose family isn’t welcoming of just anyone.

Golding appears to just be getting started with his acting career, and he comes out with a bang. He’ll also be in Paul Feig’s new film, A Simple Plan, later this year, and his addition only makes that film more interesting. Golding is extremely charming and is able to deliver comedically, when called upon. Wu is also charming, and has leading lady woven in every aspect of her performance. Her smile lights up the screen, and her tears earn all the sympathy needed to sell us on her heartache. The two were paired perfectly, and it’s hard to imagine anyone who would not to want them to be together. Of course, Nick’s mother would disagree.

Eleanor Young is played by Michelle Yeoh. She clashes with Rachel during her scenes in a very eloquent way. It never felt over-the-top or unbelievable, making the tension in the film feel much more grounded. Most romantic comedies would have played up the competition and made it a silly element of the film, but this film doesn’t. Instead, we are treated to a nuanced storyline full of solid performances by the three characters primarily involved. Of course, there are some laughs to be had in this film.

Rachel has a college friend that lives in Singapore who provides a good portion of the laughs. Peik Lin Goh (Awkwafina) and her family – her father is played by Ken Jeong – set up most of the funnier moments in the film. The initial meal that Rachel eats with them is a laugh riot, as Jeong attempts to convince Rachel to date his son who then proceeds to take pictures and mouth sweet sentiments to her. Later Peik teams up with Oliver (Nico Santos), and more hilarity ensues – especially in a later dress shopping montage.

There is a storyline in the film that centers around Nick’s sister, Astrid Young Teo (Gemma Chan), and her husband, Michael (Pierre Png). It primarily feels forced into the film as a parallel to Rachel and Nick’s story, because the film jumps to it so infrequently. Yet, we spend enough time going back to it that the juxtaposition is there, but the empathy for the characters just isn’t. Ultimately, it felt like it could have been trimmed out of the movie to make the runtime under two hours.

Nevertheless, Crazy Rich Asians was a well-made film that had two extremely talented leads who made the film. The humor could have come a little more often, but what is there brought some solid laughs. Crazy Rich Asians is definitely a film worth watching, earning the Not Quite Golden, Ponyboy.