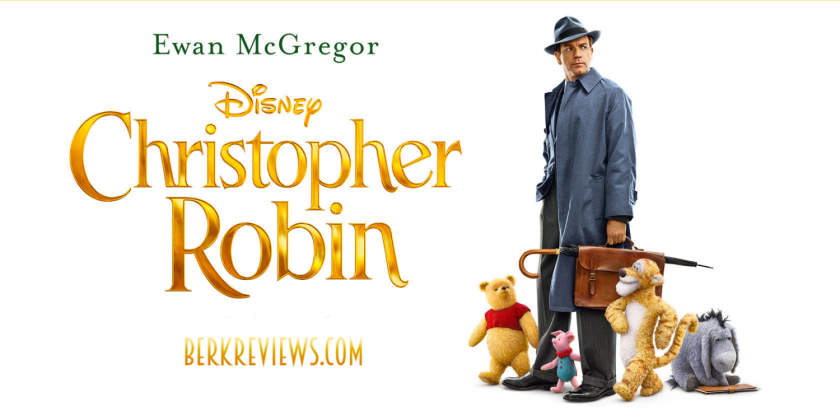 Christopher Robin (2018) has some somber moments, but it was extremely enjoyable by the end of the film. The film starts with young Christopher Robin visiting his friends in the Hundred Acre Wood for the last time before he goes off to boarding school. This scene manages to squeeze a few tears out of the audience before cutting ahead to see Christopher Robin’s (Ewan McGregor) life.

Christopher Robin tickled my funny bone and my heart

We see Christopher at boarding school, meeting his wife Evelyn (Hayley Atwell), going to war while she is pregnant, and then returning to work at a job that takes up too much of his time. Despite claiming that he’d never forget Winnie the Pooh, Christopher’s life has led him far from the days of play. It is this aspect of the story that I think won me over the most. I loved Winnie the Pooh and all the friends at Hundred Acre Woods growing up, but I had totally forgotten all about them or my feelings related to them until watching this.

Director Marc Forster and writers don’t do much new with the idea that putting work before family and fun isn’t the best way to live. Christopher is forced to cancel plans with his wife and daughter because his boss, Giles Winslow (Mark Gatiss), has put him in a tricky position. The luggage company in which Christopher is the efficiency manager of has to cut 20% off their budget, or they’ll have to make personnel cuts. He chooses to try and solve this problem to save his co-workers jobs making it appear that he feels work is more important than spending time with his family.

While the live action cast all perform admirably, it’s the animated characters that really give this movie life. Eeyore (Brad Garrett) has long been my favorite of the Winnie the Pooh characters, and he shines his gloomy light all over this film. The art design of his character isn’t my favorite (I think Pooh or Piglet wins that award), but from the moment he floats past adult Christopher Robin towards the waterfall, he steals the movie. However, Pooh (Jim Cummings) has always been great, and he gets some major lines that made me laugh – and other times – made me cry. Tiger (also Cummings) and Piglet (Nick Mohammed) also have some solid moments, while the rest of the friends take secondary roles.